Ever since our unsuccessful attempt to reach Frozen Lake on Mar 30 (https://www.skierroger.ca/index.php?content=showski&id=1068) when we had to turn back due to avalanche hazard, the Little B's have been begging me to go back and try again. And so about a week ago we headed out to the PLPP Elk Pass trailhead to see if we could find a safer route up. I wasn't sure how far we'd have to walk before we found enough snow to ski, but the answer turned out to be exactly 0 metres (photo 1)! The weather was sunny and +3C when we set out at 10am. There was a good freeze the night before. We were the only car in the parking lot. Between Collembola, tree needles, and other debris, the Elk Pass XC trail was pretty dirty (photo 1), so we took the snowshoe trail to the top of the "Big Hill" instead. We continued on the Elk Pass trail until the Hydroline junction, where we moved onto the pristine hard crust of Fox Creek (photo 2). We rejoined the Elk Pass trail at the bridge over Fox Creek, which was showing about a metre of snow (photo 3)! The snow was a lot cleaner by now (photo 4). We moved back onto the creek for the final stretch to West Elk Pass (photo 5). From there, we followed the summer trail to Fox Lake (photos 6, 8, and 9).

Now, the fun began! After our unsuccessful Mar 30 attempt on Frozen Lake, the Little B's and I reviewed our photos and maps, deciding that the best route was to follow the dense trees between the two lakes (red line in photo 9). We passed the edge of a massive slide path (photo 10), after which the terrain rapidly steepened. At one point I tried carrying the Little B's, but they vigorously complained and insisted they make the ascent under their own power. They directed me to the right, traversing for about 100m where, as they expected, we found gentler terrain. It took us up the edge of the avalanche slope that turned us back on Mar 30 (photo 11). Except this time, we were on the Frozen Lake side of the slope so we didn't have to cross it. From there it was an easy ascent to Frozen Lake itself (photo 7).

After a short celebration and a few photos, we descended back to Fox Lake and West Elk Pass. From there we followed the provincial boundary cutline to "Centre" Elk Pass. We had hoped to continue to East Elk Pass, but the Little B's had a dinner engagement back in Calgary. So we took the Elk Pass XC trail back to the parking lot. To add to our excitement for the day, there were fresh grizzly tracks on the trail most of the way back! We saw no one all day. 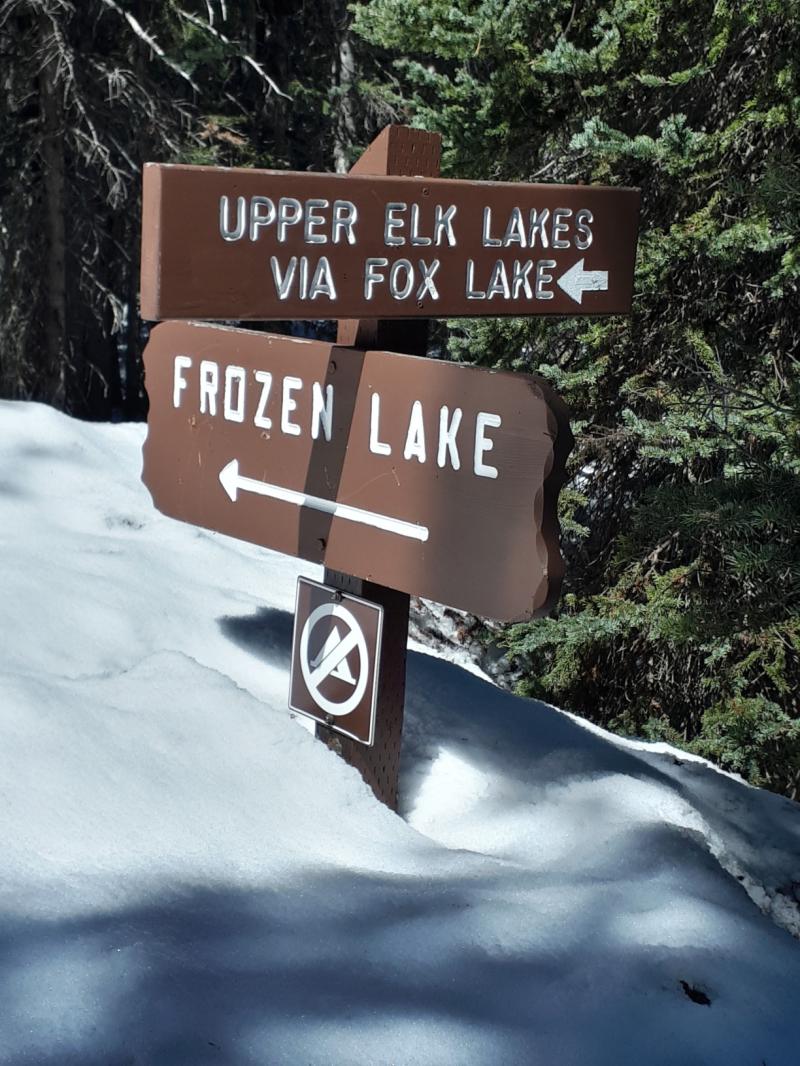 Photo 9: Fox Lake with Mt Fox behind, our route in red, and Frozen Lake hidden at the top 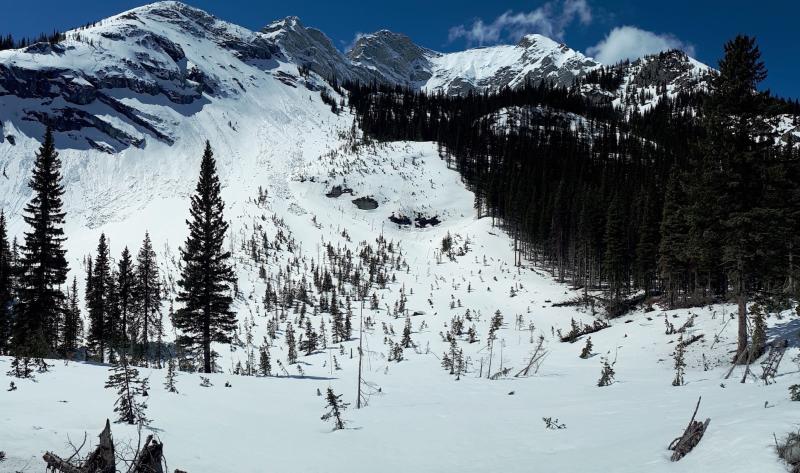 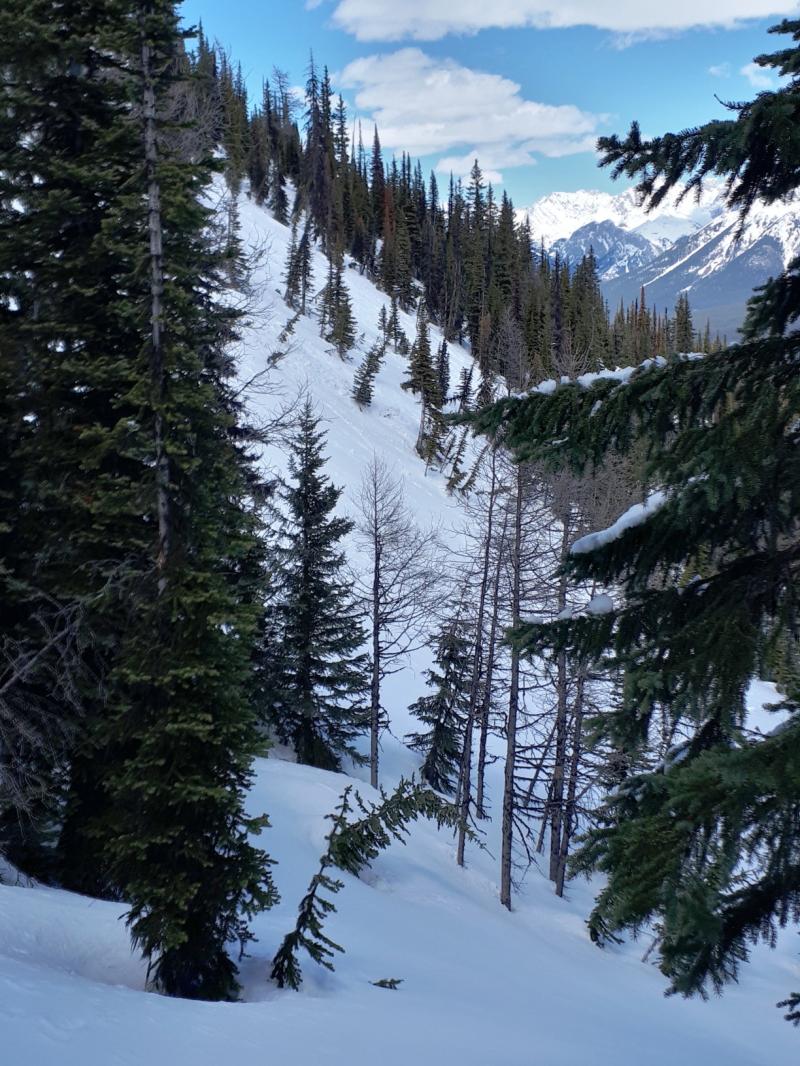 Photo 11: Slide path that turned us back on Mar 30

Photos 1-6 from my report 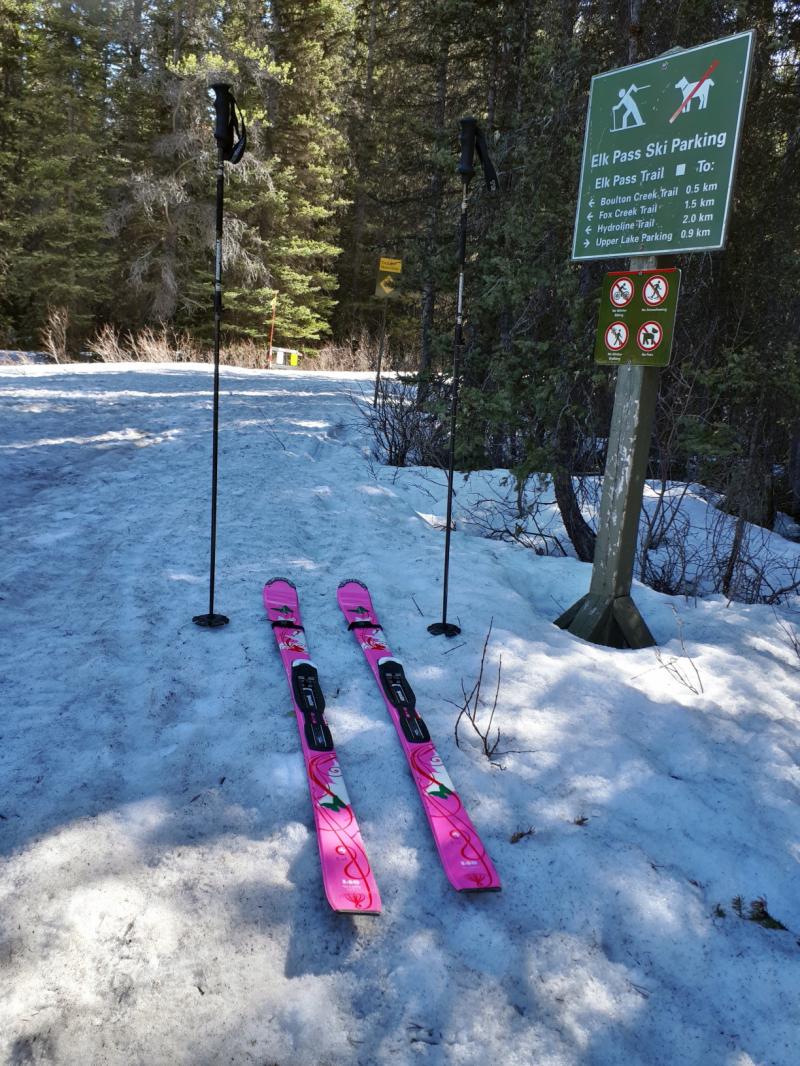 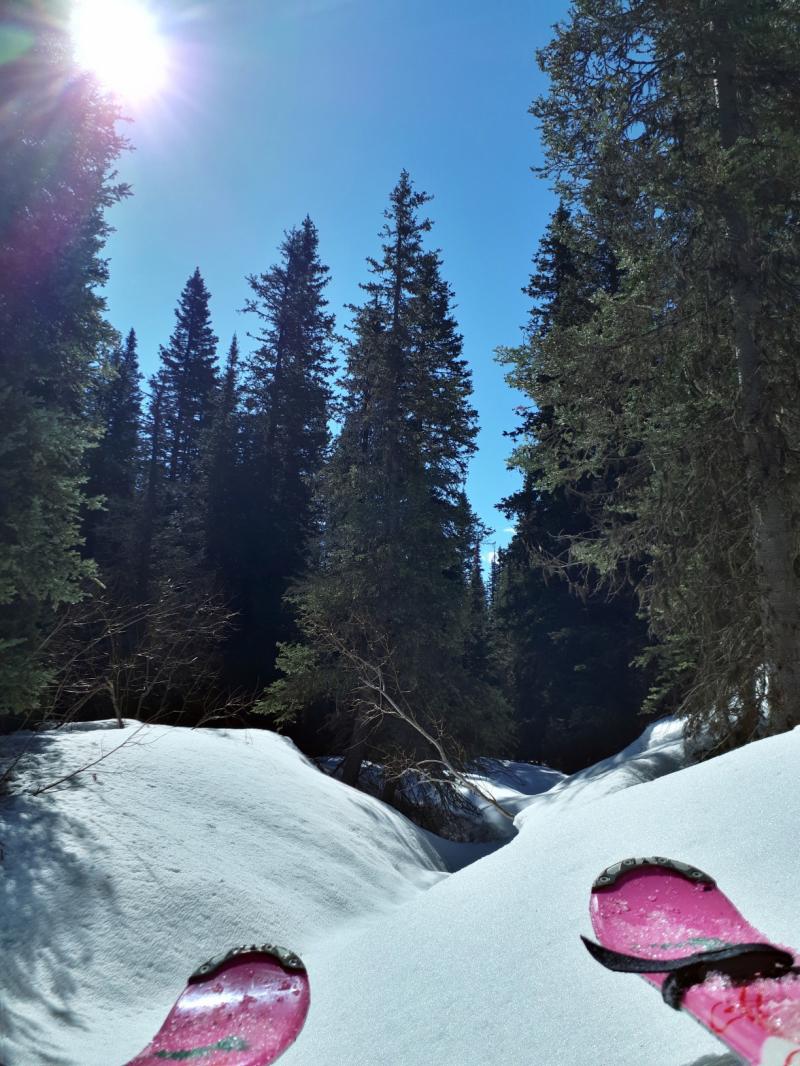 Photo 2: From Hydroline, heading up Fox Creek instead of Elk Pass 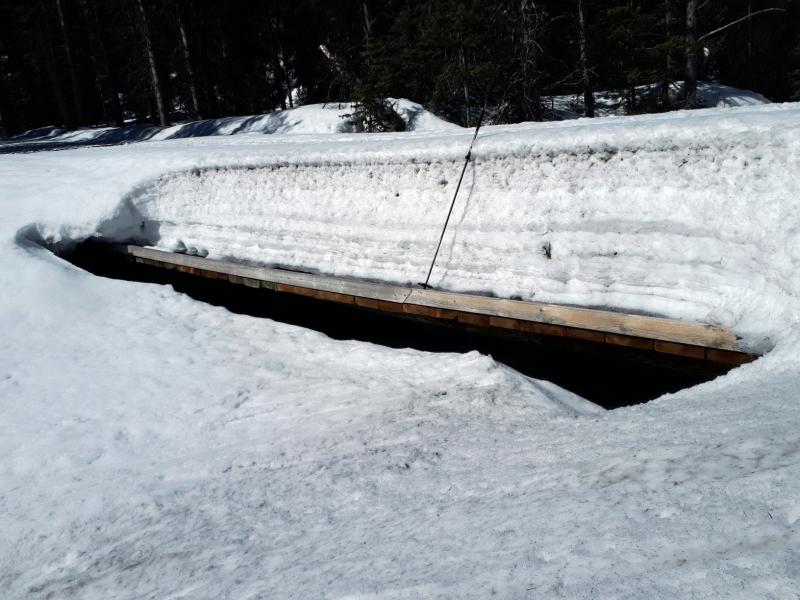 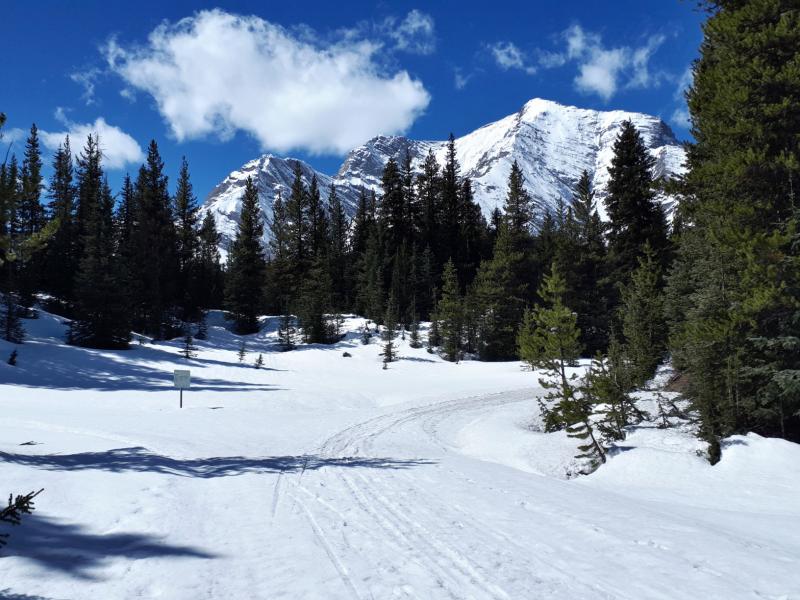 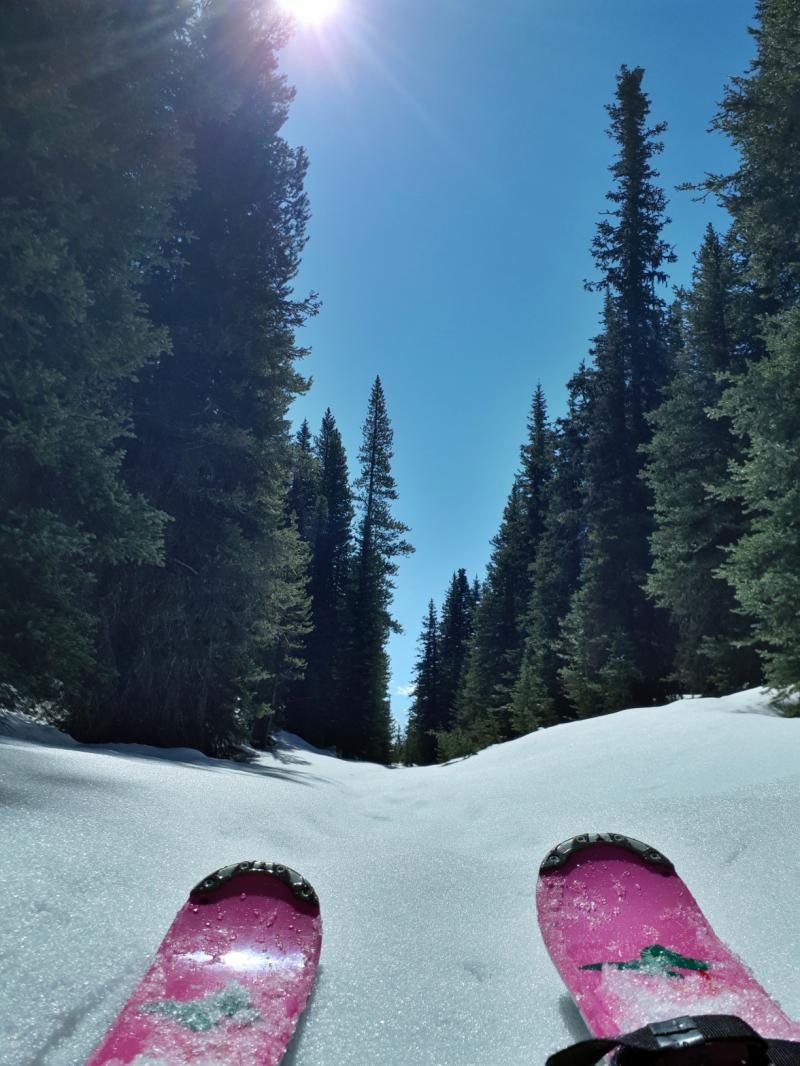 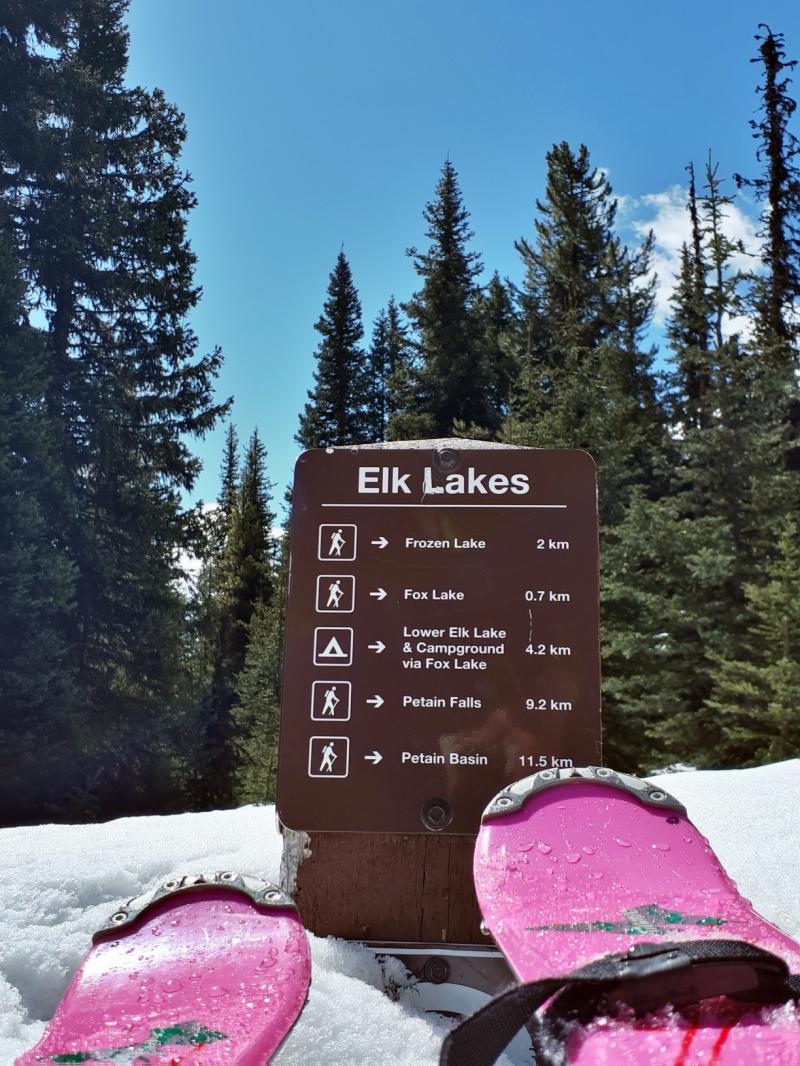 Photo 6: The Little B's check out our route

Thanks for the report!

I've heard about this Frozen place. People say you need to have skis with a certain style of graphics to get there and matching pyjamas to dream about it. 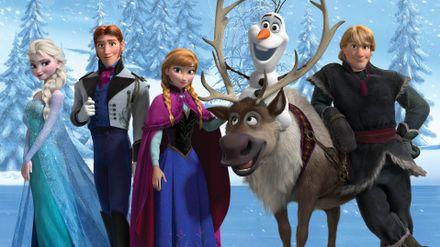 Thanks for the info, aqua toque. That explains all the strange tracks we saw up there!