Thanks for the Akamina recommendation DAB! We'll ask Dad if he wants to check that area out.

Those Little B's must have faced some serious base scare face on the Powderface. That is some serious eastern slope hard ski hike trippin' reminiscent of Yaha Tinda region in my younger years of the last century.

The Little B's might need some fluffy southern vacation time in the Akamina region after the cold weather goes away in about 10 days or so. Nice quiet place, burned out 3 years ago, offering joyous terrain west of the Prince of Wales. Once they check that place out they may never want to return north. Such easy access for the B's they might get too lazy to ski anywhere else, although they might find the exceptional scenic drive at sunrise, where the prairie meets the mountains, a tad lengthy.

MaSid - Thanks for your suggestion. Any chance of you building a snofa up there? If so, please make it wide enough for us - 140cm!

One crazy adventure but much appreciated to live this vicariously!

Another option, especially after road closes: powderface creek route, out and back. Was in there monday (but hiking vents ridge traverse). Good walker packed base in the shadowy valley bottom, at least before the warm temps anyway. But it holds snow back there. A good one after a melt freeze followed by an upslope dump. Perfect for a little B slalom run. 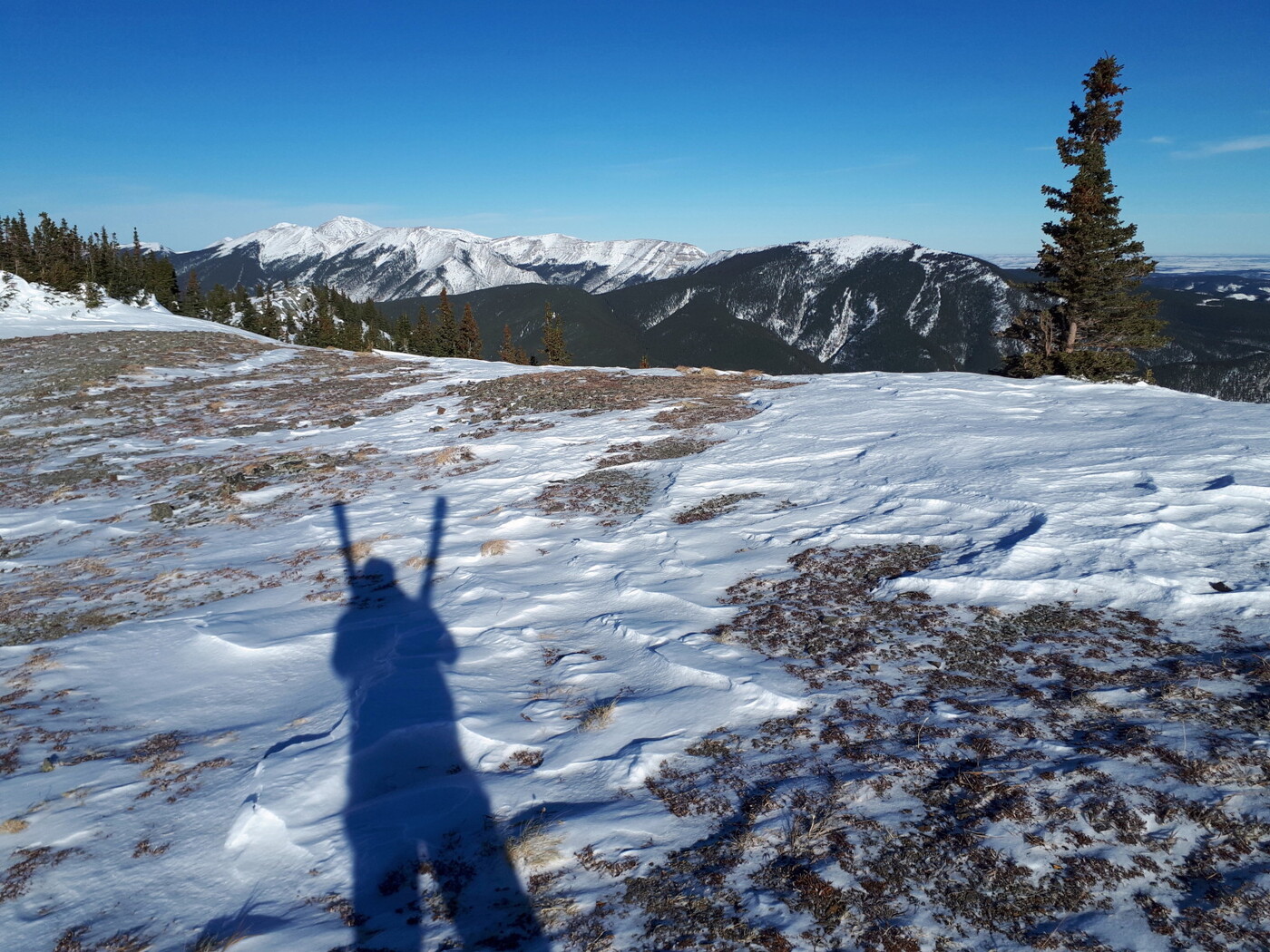 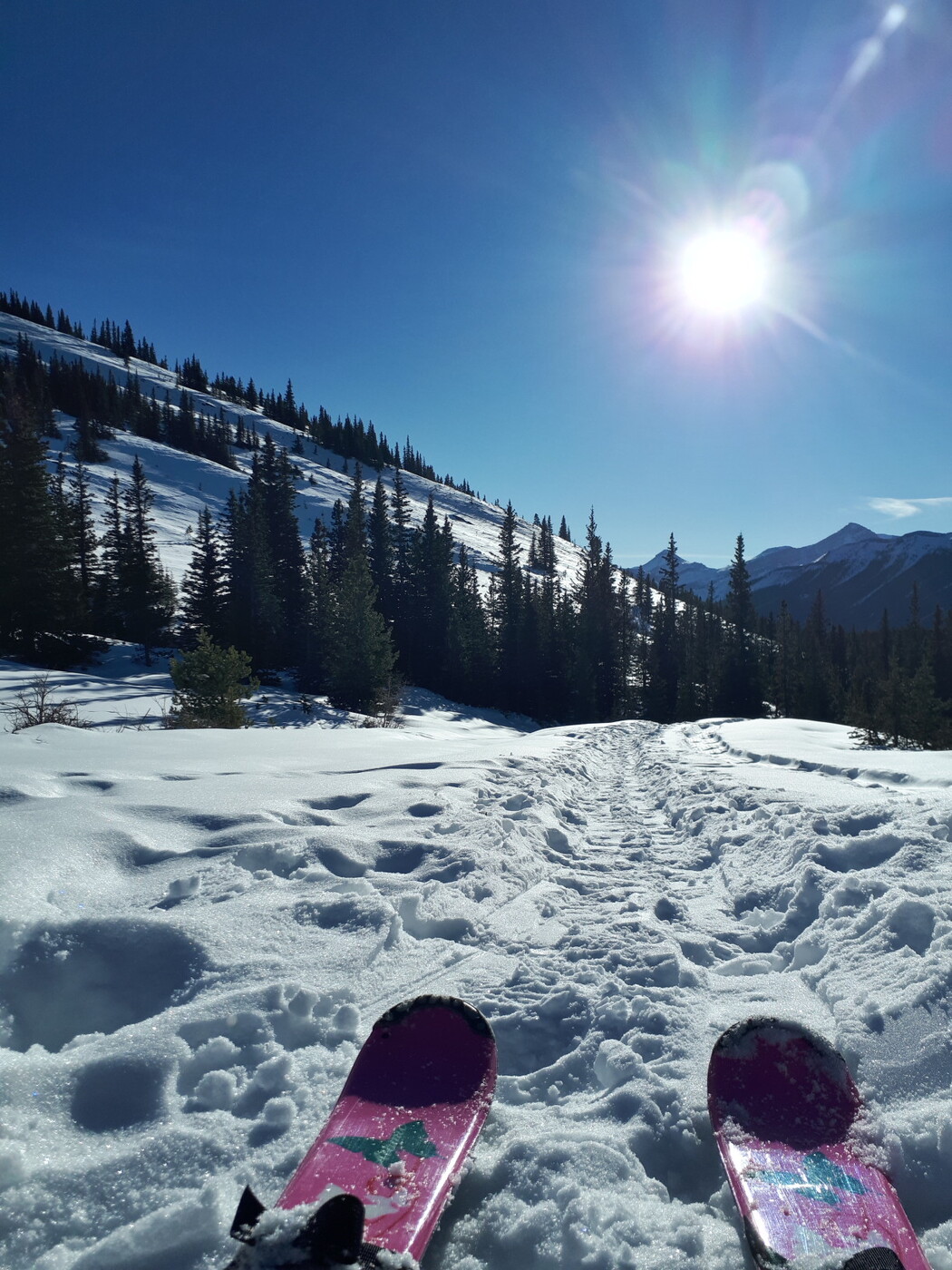 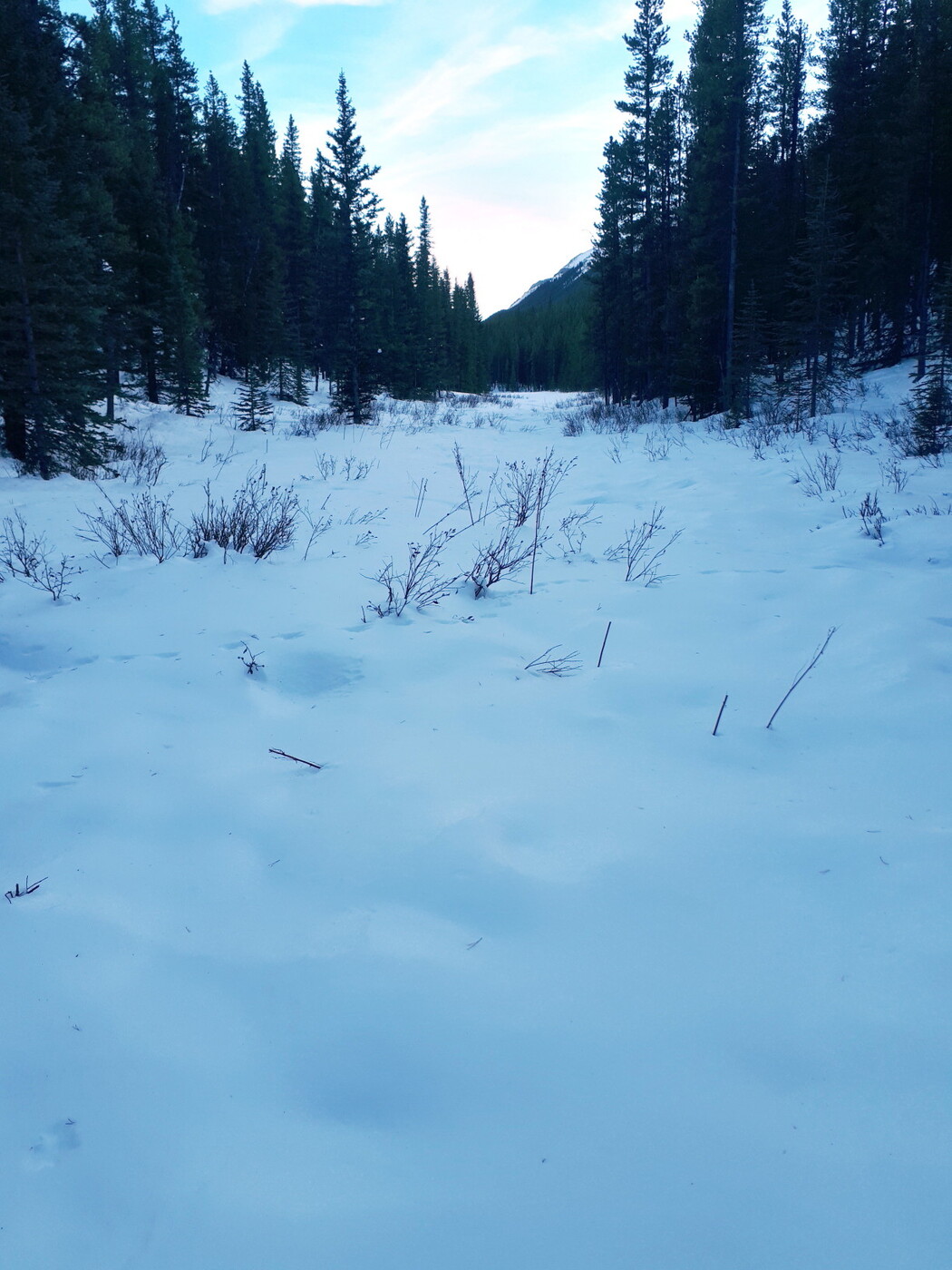 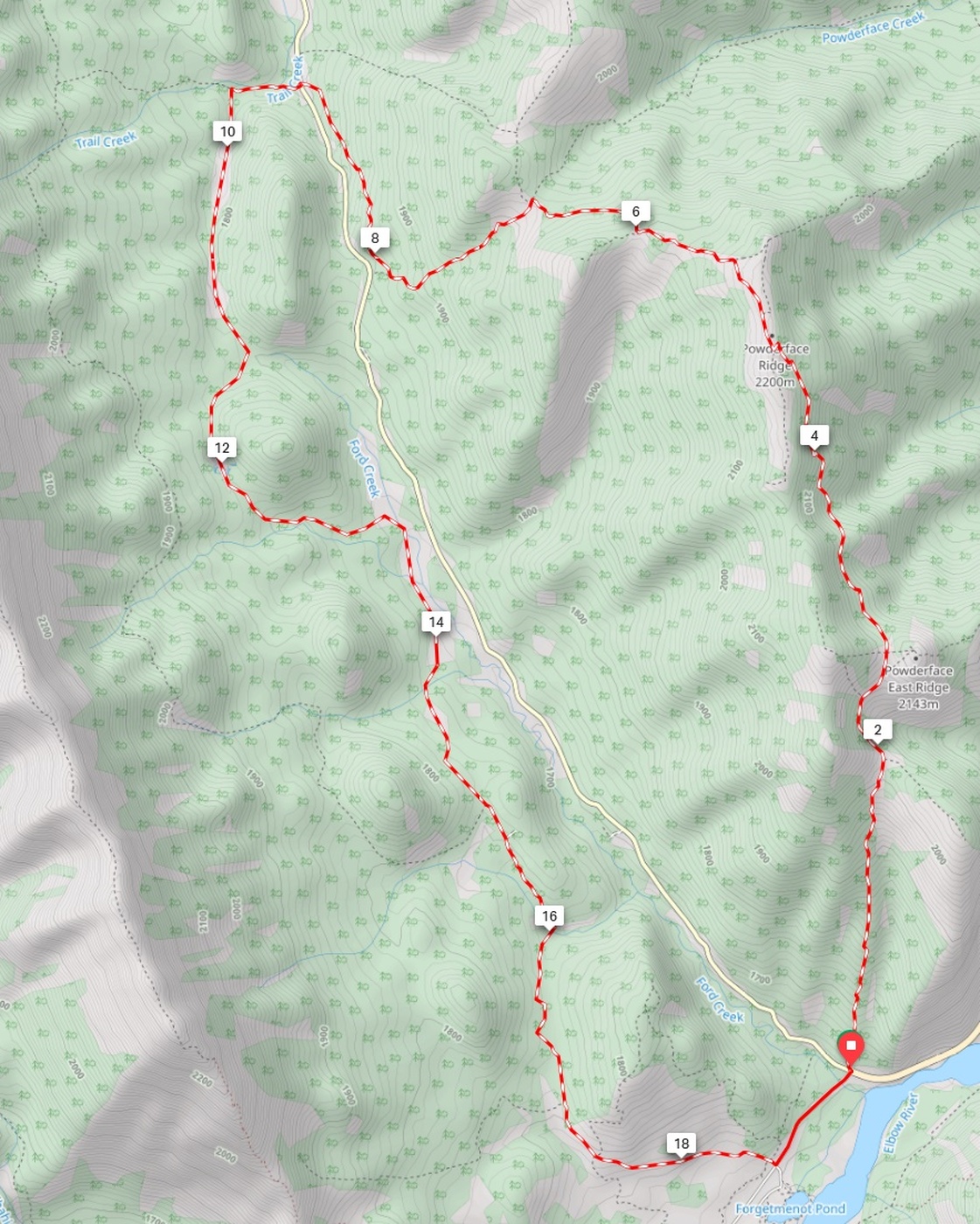 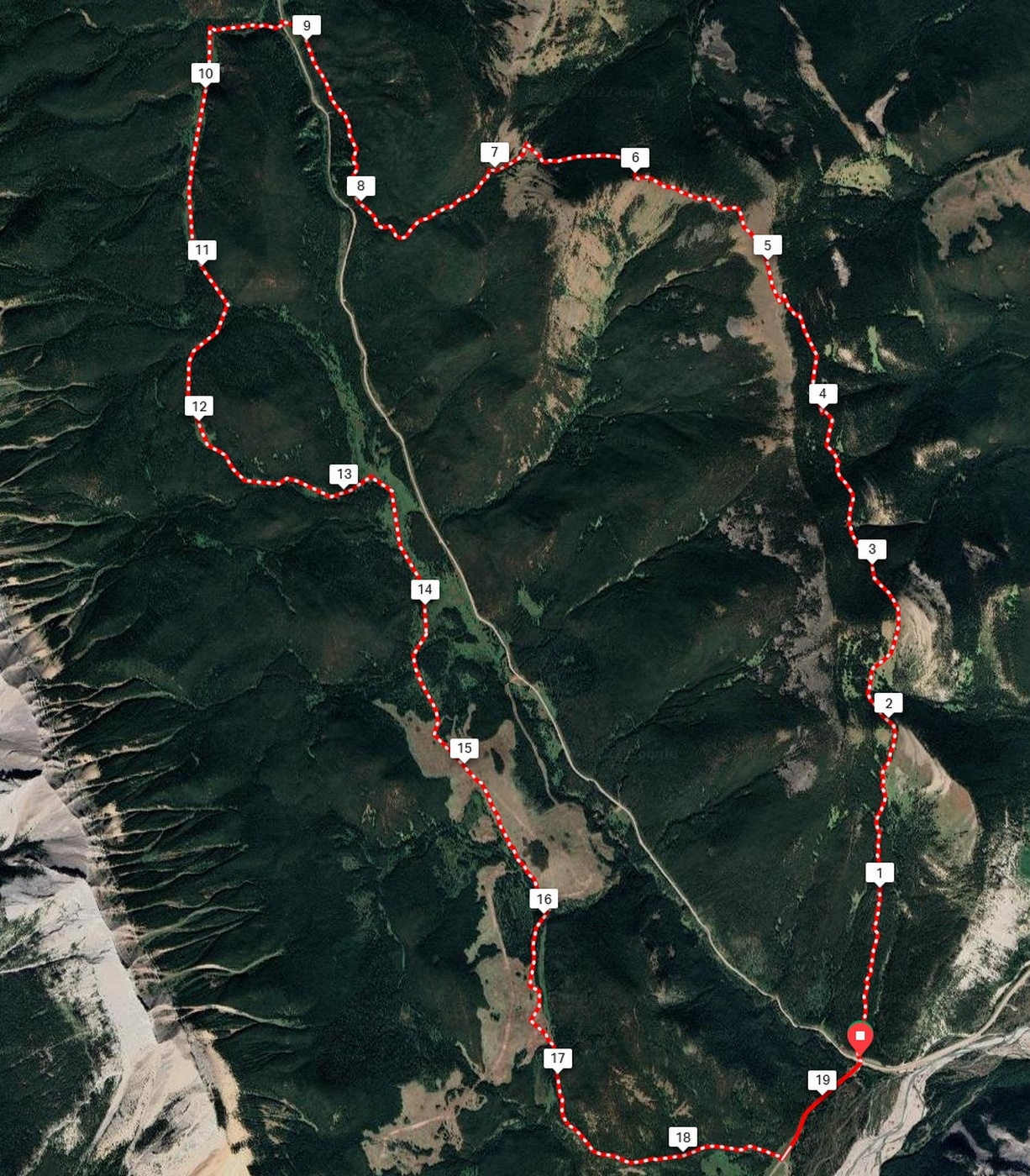 The Little B's and Dad

It was time for another adventure! Since the Highway 66 winter gate closes Dec 1, we wanted to try something beyond it while we had the chance. We decided on a south-to-north traverse of Powderface Ridge, returning via the Ford Creek trail to make it a loop. But the Ford Creek trail description in Gillean Daffern's Kananaskis Country Trail Guide Volume 2 spoke of climbing, descending, and crossing avalanche gullies. Although we were a party of 3, the safe minimum for travel in avalanche terrain, Dad was the only one with avalanche safety gear. So instead, we plotted a route that traversed below those features, following what looked like meadows and clearings on the satellite image. (photo #10, #11)

En route to the trailhead, we were greeted by a giant snowman at Rainy Summit! (photo #2) We parked at the end of Highway 66 and headed up Powderface Ridge. The trail had been packed by hikers, but there were lots of exposed rocks and roots. Manoeuvring around them slowed us down quite a bit, but it would have been a lot worse had we come down that way. After about 40 minutes we gained enough elevation that the snowpack finally covered all the rocks. (photo #3)

A hiking Dad passed us, carrying his 14 month old daughter. It looked like she was bored and wanted to play a game. A half hour later we were proved right! (photo #4) Like us, her favourite game was Hide and Seek, and like us she didn't understand the rules! (For an explanation, see " The Little B's Try Out Fat Biking..." at https://www.skierroger.ca/index.php?content=showski_basic&id=1274 .) We picked up the boot and carried on. Several minutes later we met them on their way down. She was very happy!

We continued toward the col between Powderface Ridge and Rainy Summit Overlook (photo #5) and then the long traverse along the east side of Powderface Ridge until we finally emerged on the summit. (photo #1, #6) The last few metres were the hardest as we had to sidestep up a steep 2-metre snow slab that was growing into a cornice. After a brief break to enjoy the views, we continued north along the ridge. There was hardly any snow so we got to piggy back in Dad's backpack, just like the little girl in hiking Dad's child carrier! (photo #7) Once we reached the snow again, we jumped out of the backpack and guided Dad down toward treeline.

Dad didn't bring a copy of Gillean Daffern's trail description, so we were a bit worried we'd get lost. The Dafferns must have been worried too, because they came up to meet us at treeline and point us in the right direction! Our descent to Three Trail Pass (photo #8) was so quick that we were got dizzy from all the switchbacks! We continued down to the road and realized we had missed the turnoff for the East Leg Connector. So we backtracked 150m to the junction and turned north, breaking trail for the first time this trip. We crossed the road to the west side following the trail for 400m, then turning south off-trail following the meadows. (photo #9) The trail breaking was really hard work because there were lots of buried willows causing us to sink over 30cm with each step! We tried skiing on cow, moose, and deer tracks, but it was almost as difficult. We decided the deer had the best tracks because they tended to avoid the willows and stay on more solid ground.

A couple of hours later we headed to the road because we would have run out of daylight had we stuck to our route. We measured 4km along the road back to the car. But 2km later, it was the Dafferns to the rescue again, picking us up in their car! Thanks Gillean and Tony! 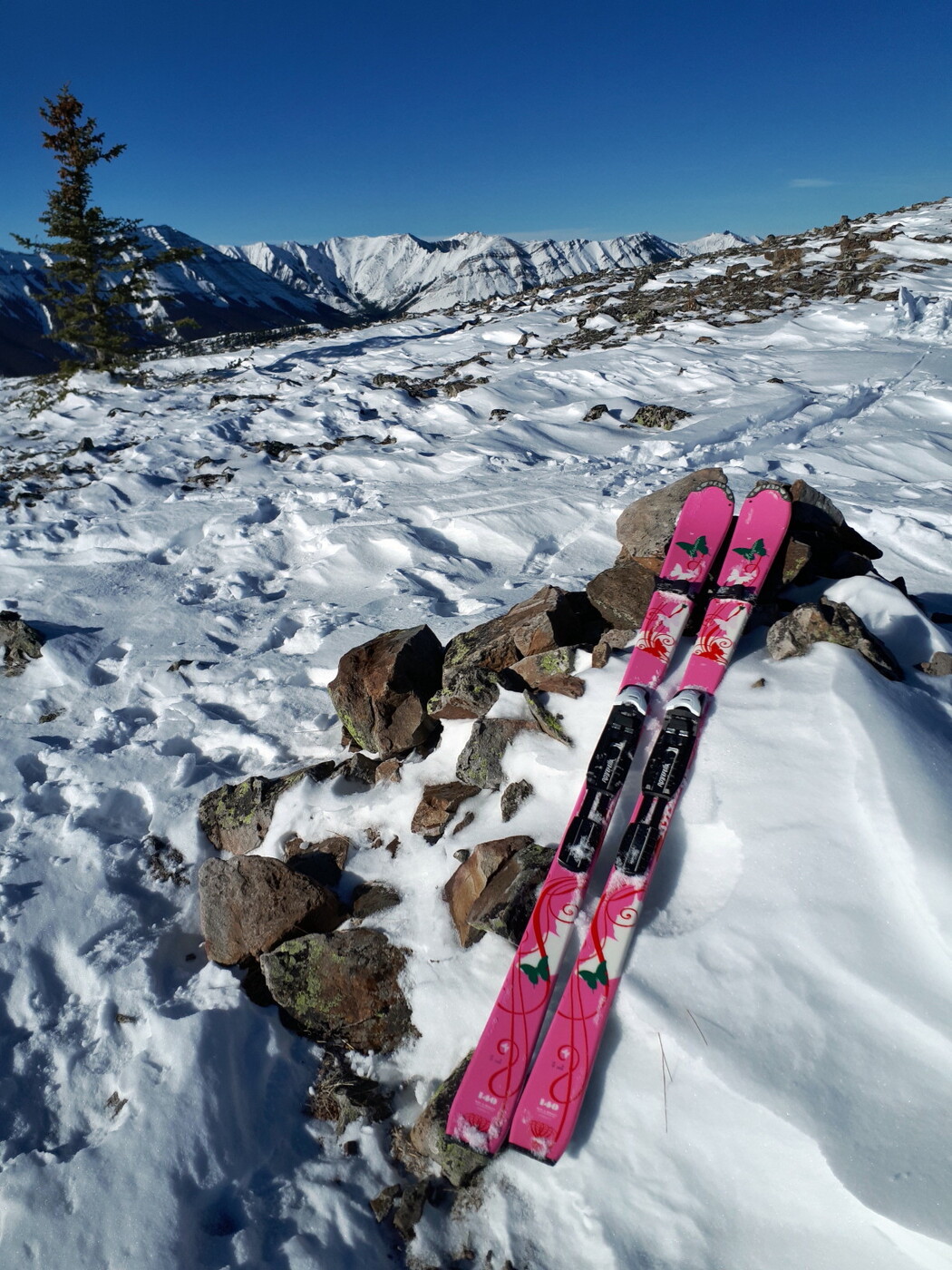 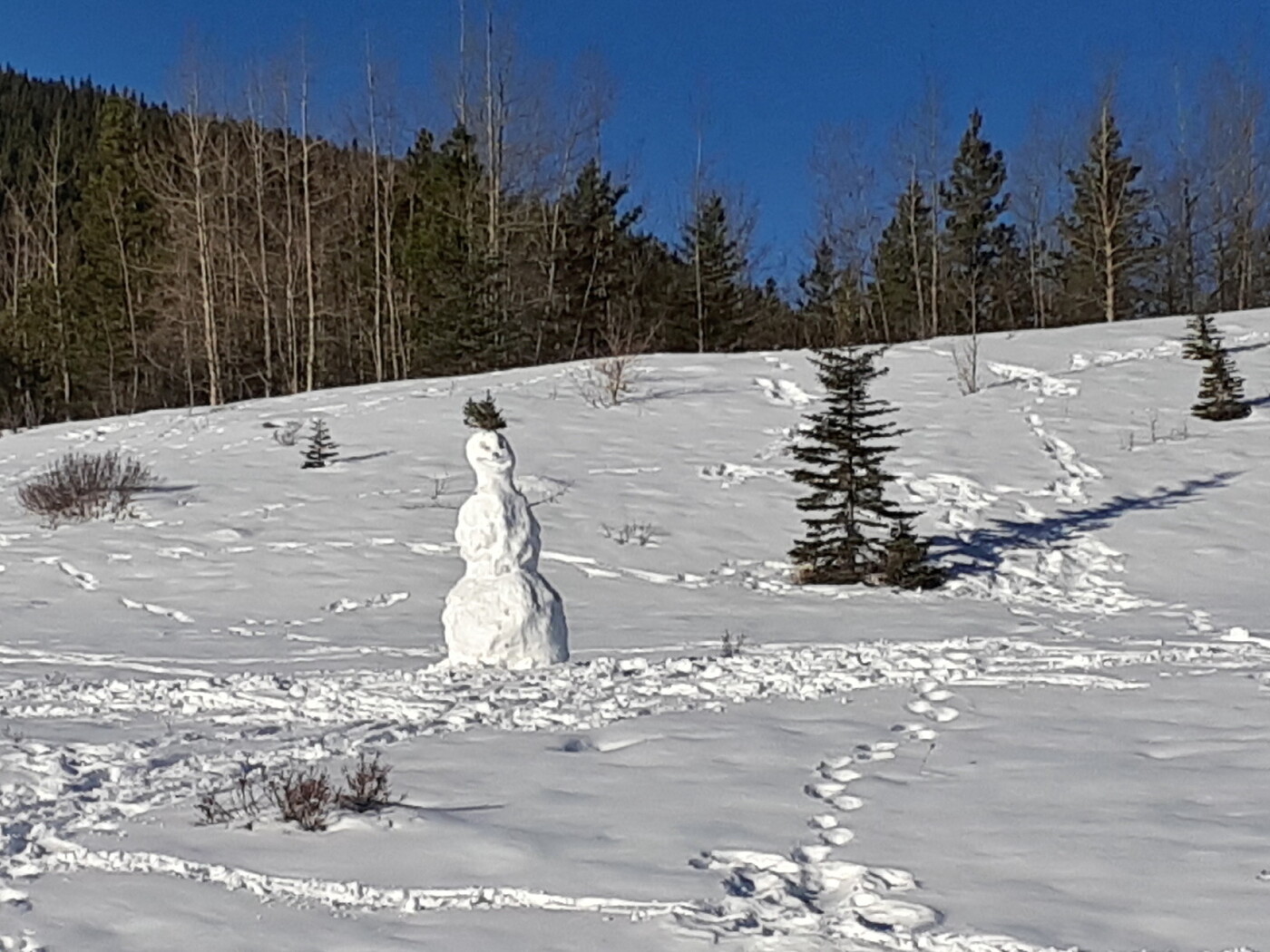 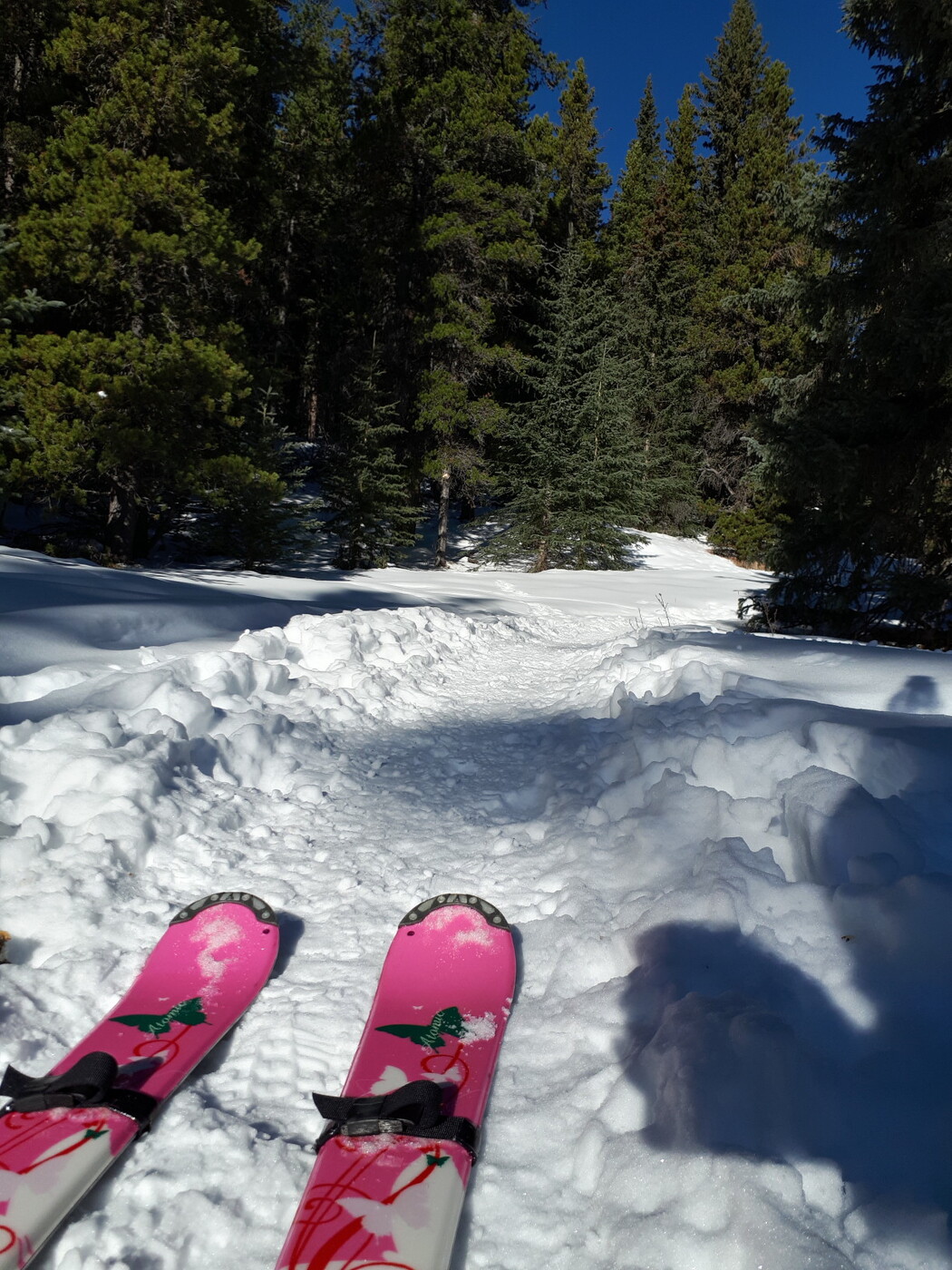 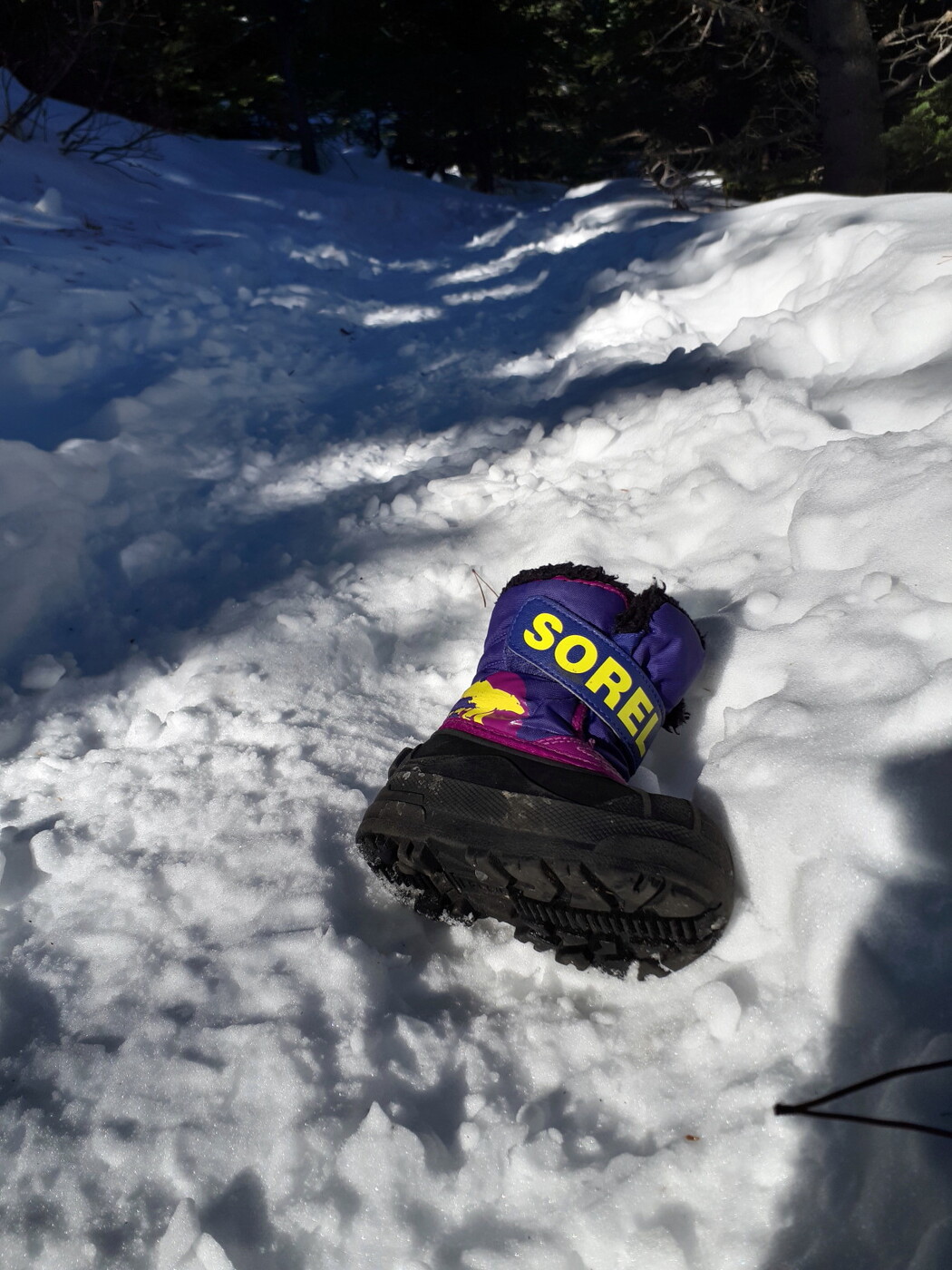 Photo #4 We aren't the only ones that didn't understand the rules for Hide and Seek! 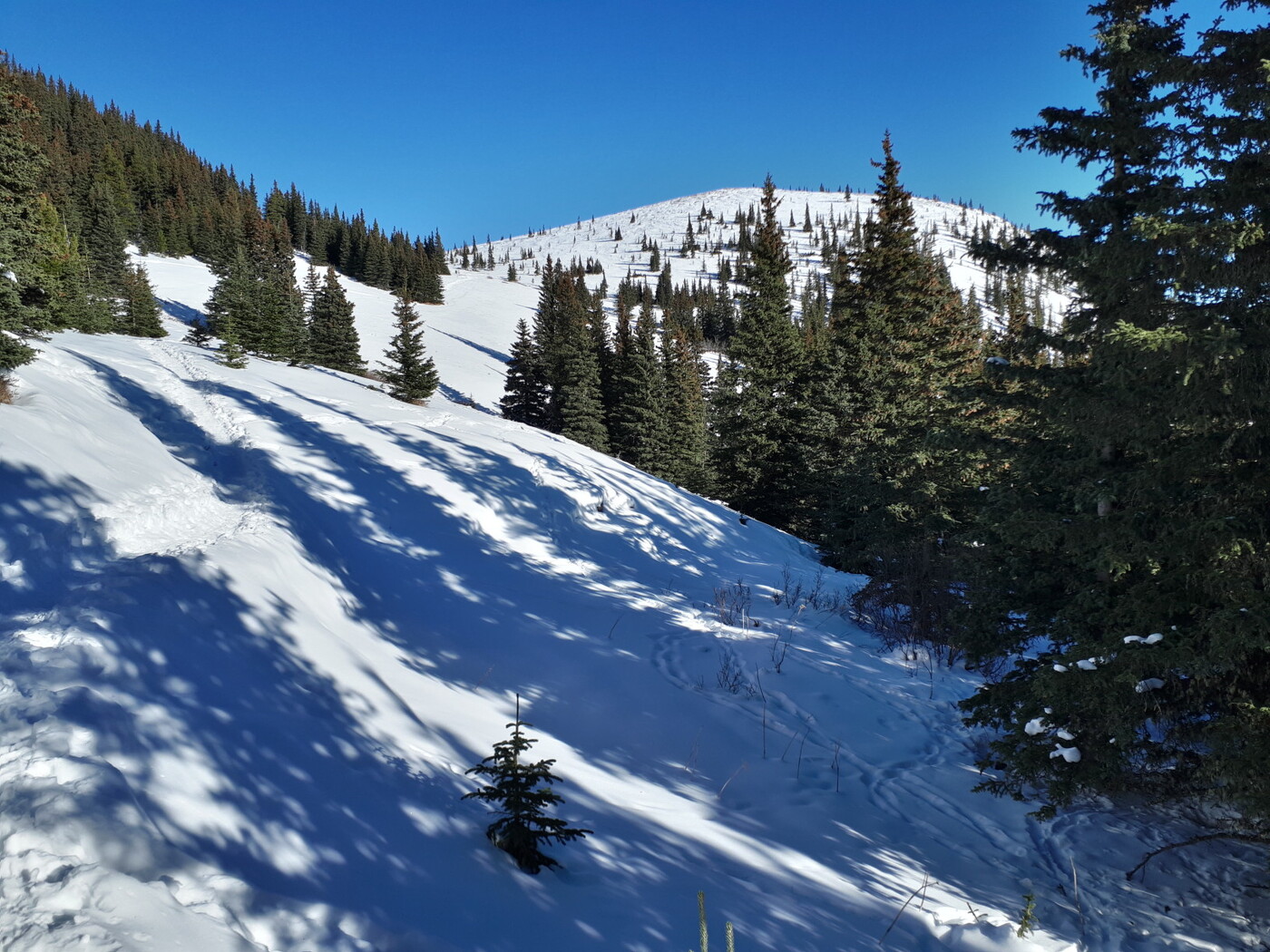 Photo #5 The col between Powderface Ridge and Rainy Summit Overlook 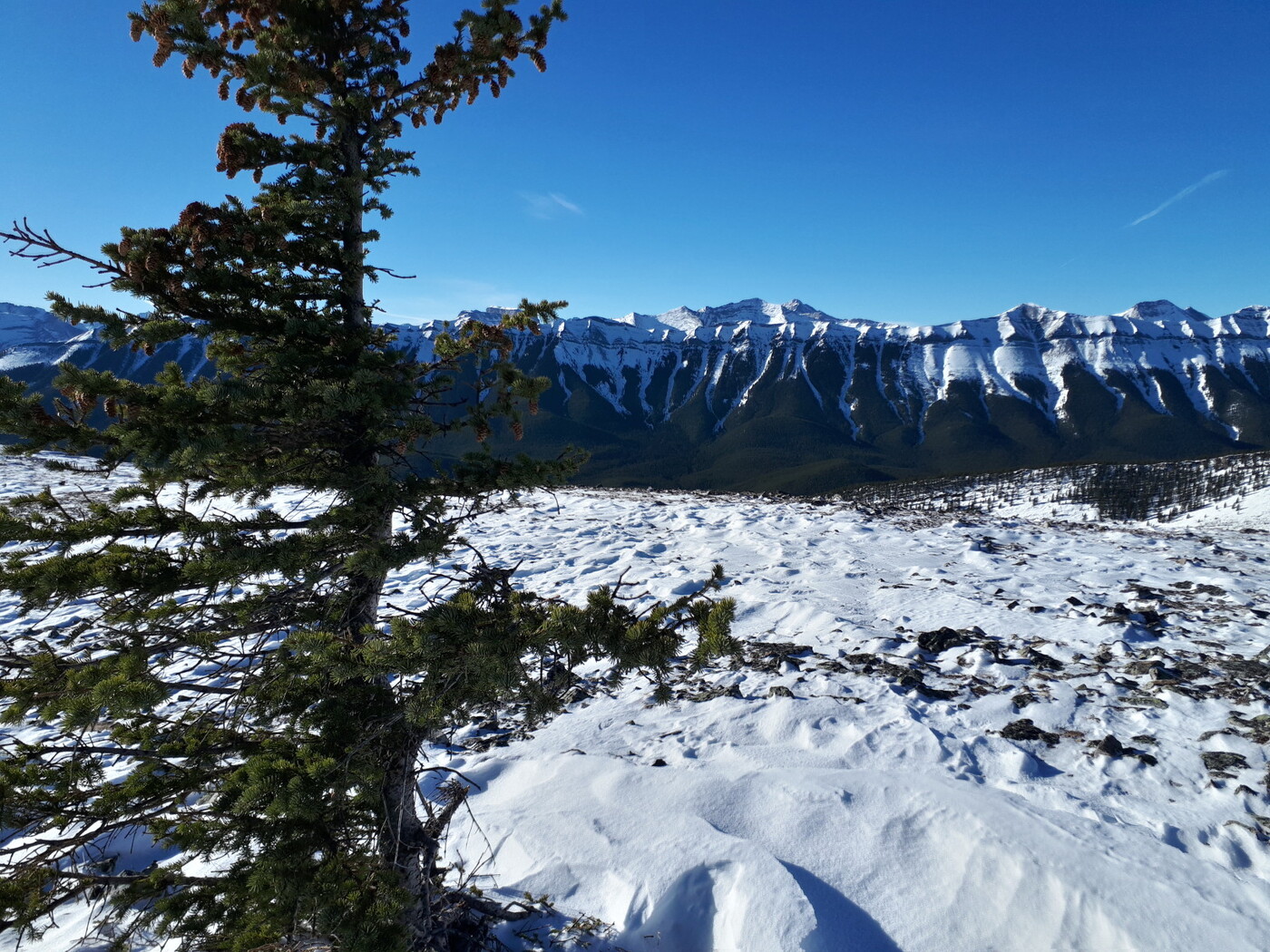