Yes, there is better snow on the north aspects, but it's early season and there hasn't been much snowfall in about a month. Yes, those were probably my ski tracks from a while ago.

The logging on Boundary Ridge was done in 2012 to create a "wildfire containment line" to protect Bragg Creek. The downed trees that are found throughout the WBC trail network were blown down in an intense wind storm on November 30/Dec 1, 2021. Many of the trees that blew down were the oldest and biggest trees in the area. When we counted the growth rings, most of the trees were between 100 and 110 years old. Interestingly, there were virtually no trees blown down in areas that had been logged at some point over the past 50-70 years. I suppose the younger trees were just more flexible, or they hadn't outgrown their root base.
In any case, it took Bragg Creek Trails volunteers and Alberta Parks and Public Lands staff 4.5 months, working every week to clear the 2760 trees that fell across the trails.

Looks like Carl and the little B’s are on the improvised bench at the high point of the boundary horse trail. It basically follows the upper edge of the large cut block. As an open slope it’s sun exposed in the afternoons, so needs good timing and conditions for a safe ski. Lots of stumps/logs, but relatively smooth grass and dirt, as opposed to rocky (with the exception of the area around the bench).

The Little B's and Scratchies in the first picture look like they are in a bombed out forest on the edge of Ukraine.

If one does a time lapse view of google earth, going back 2 or 3 decades, one can see how the Conservatives in Alberta have made much of the older growth forest in the Eastern slopes disappear. More has disappeared in that time period than the 100 years before. It used to be called the Alberta Forest Reserve, in order to protect watersheds for drinking water and irrigation, but no more. The only advantage to the clearcutting is the views that appear on a days skiing adventure.

Thanks for the tip Alf! We noticed some old wide-ski tracks on Boundary Ridge. Were they yours? Any idea if the snow coverage is better on the north side?

Once there is a new snowfall, the Little B's and friends should try Boundary Horse trail... a much better skiing option than Boundary Ridge.

The Little B's, Dad, the Scratchies, and Carl V M

We recently reported our rescue of a pair of abused child skis from France. See the last paragraph and photo at https://www.skierroger.ca/index.php?content=showski_basic&id=1295 . It turns out they had been held captive and forced to perform under cruel and heartless conditions in ski resort halfpipes. We're now delighted to tell you that after recovery and rehabilitation, the "Scratchies" took their first tentative strides to experiencing freedom in the great outdoors where they were meant to roam. Their guardian, Carl V M, joined us and Dad for a short trip on the Boundary Ridge fatbike trail at West Bragg Creek this afternoon.

At first the Scratchies didn't understand what was happening. They were afraid that yet again they were being forced to perform Fakies, AlleyOops, Corkscrews, and Underflips on an icy halfpipe in front of jeering crowds. But we assured them all was well and there was no ski resort in sight. Carl helped them put on their kicker skins for the first time, having only gone uphill on ski lifts in the past. Then their excitement took over as they raced off into the wilds with Carl and the rest of us trying to keep up. Up and up they climbed, past hikers and fatbikers who gaped in amazement at the sight! We couldn't stop them until they reached the top - photos #1 - #3. We continued along the ridge (photo #4) and descended to Iron Springs, with Dad and Carl carrying us and the Scratchies over a few bare sections. Once on Iron Springs it was a quick downhill glide back to the car. The Scratchies can hardly wait for bigger adventures yet to come! 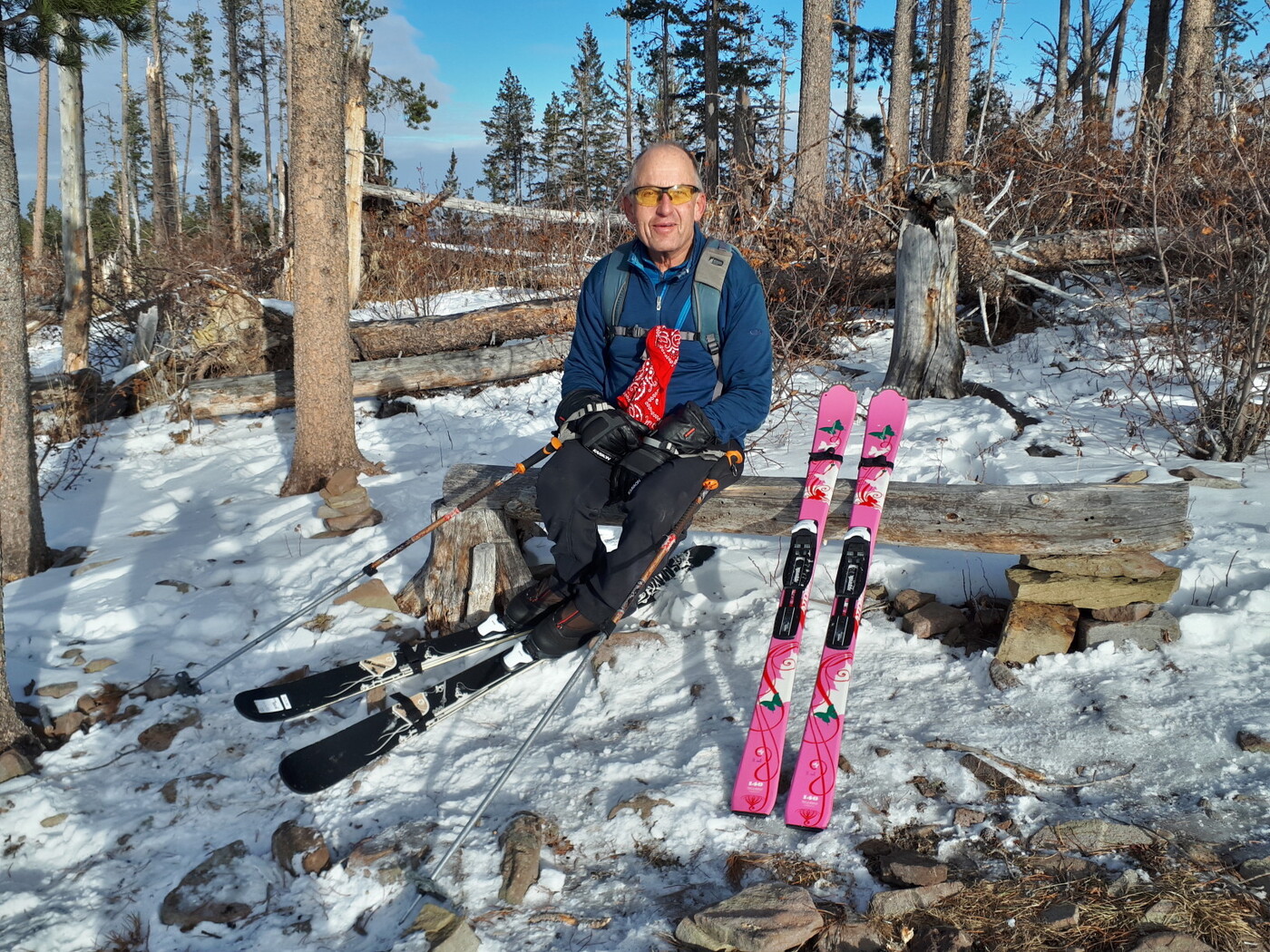 Taking a break at the top of Boundary Ridge 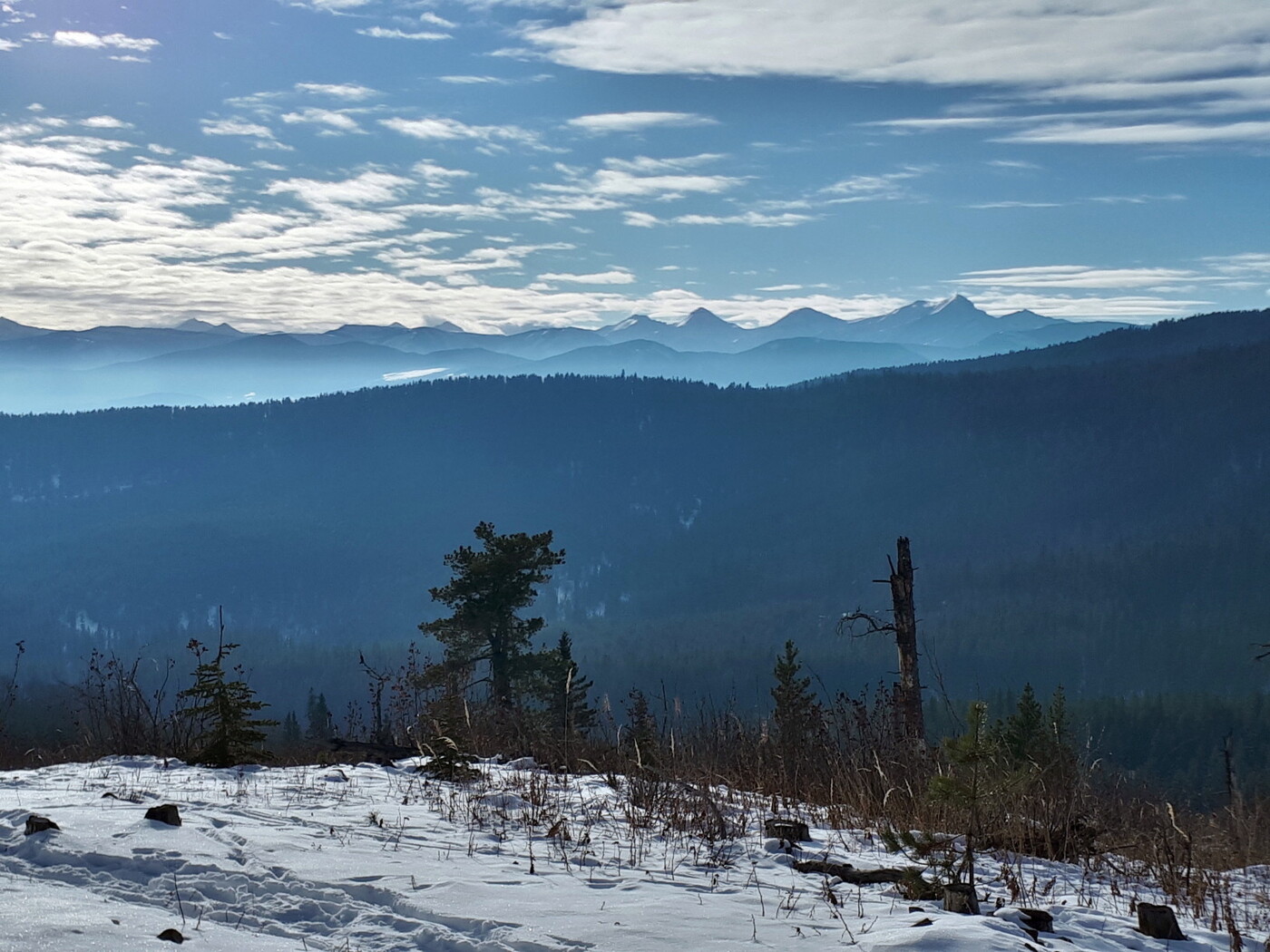 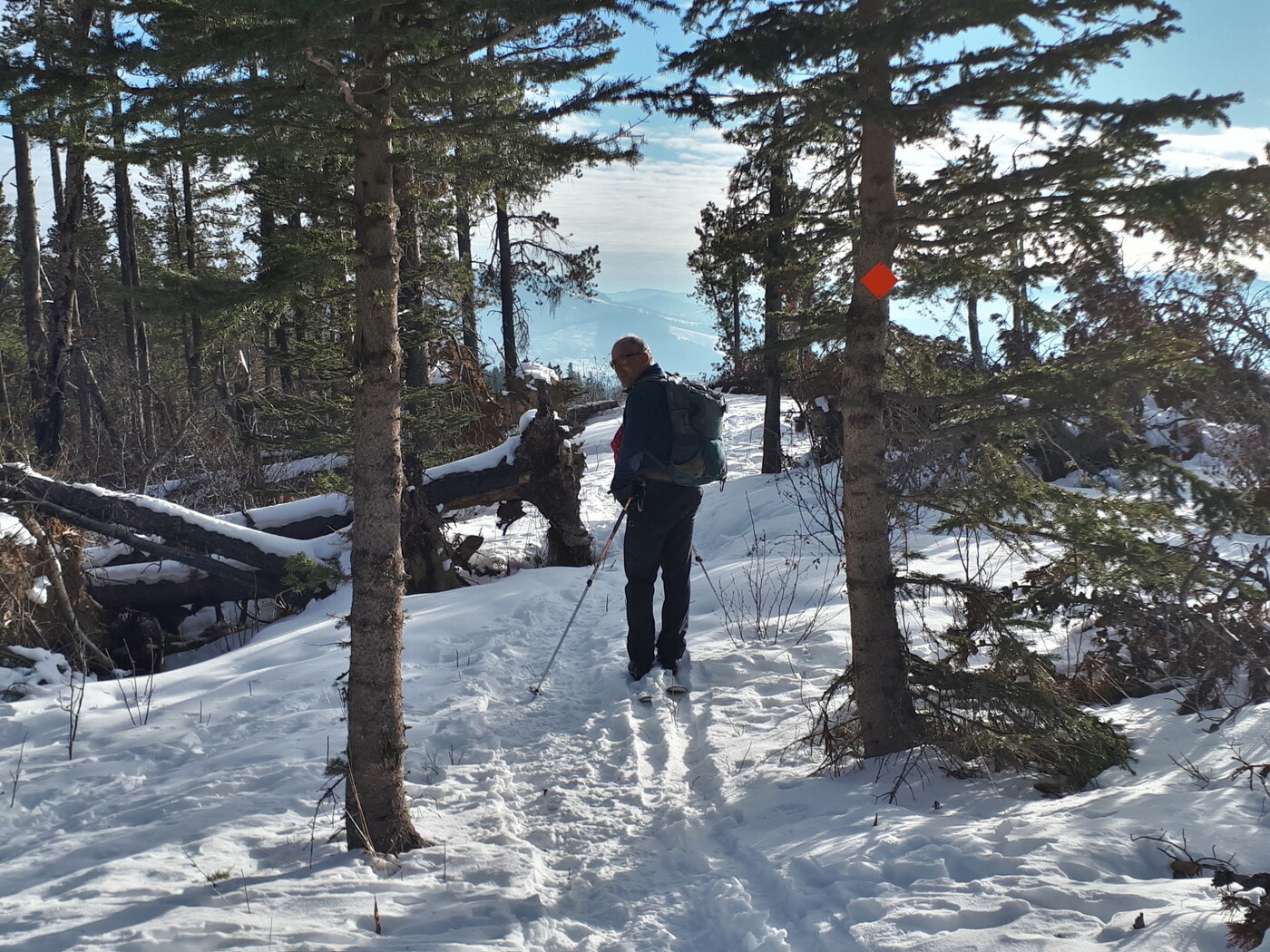