Well done! A less courageous person would have crawled to Chuck and Jeannette's to beg for a ride to the Cave and Basin.

Democracy - yeah, I think "brutal" would be a good way to describe the trees! There were hundreds of them across the trail. 28km and 9 hours of skiing, but both of those numbers could have been a bit smaller if I had made better route choices at the beginning (when I went exploring near the creek instead of following the edge of the cutblock).

Were the trees brutal to get over? How long was your trip in terms of hours and kilometers?

Nice to see the night shots. Night skiing is sweet as long as you don't have brutal trees to go over.

Once you ski in the black, there is no turning back.

Your best days and nights are ahead.

Chuck - without the light touring skis, I would still be out there, stuck in a hole somewhere!

Brings back memories of when I did that trip in the opposite direction on January 9, 2014.
Tell me Sara, that your light touring skis finally paid off!
Congratulations. 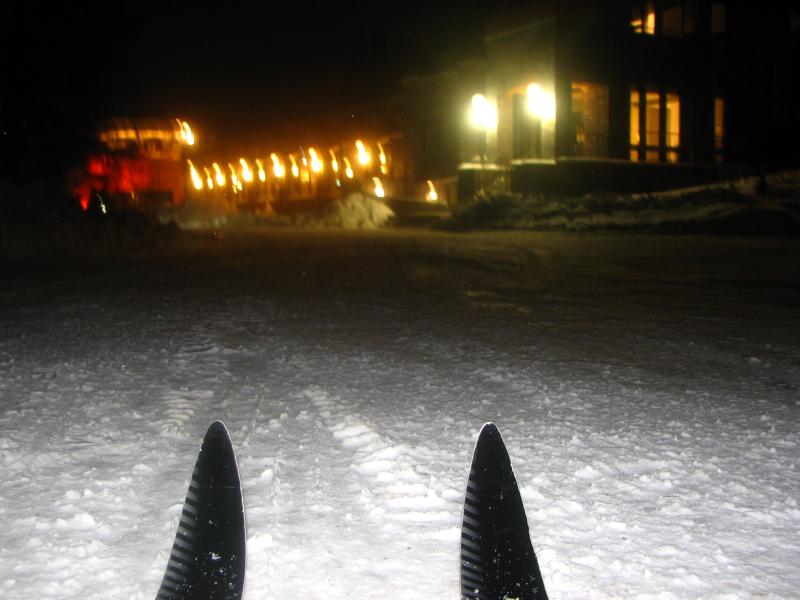 Arriving at the Cave & Basin as it got dark

My climbing skin attachment broke, which made it challenging 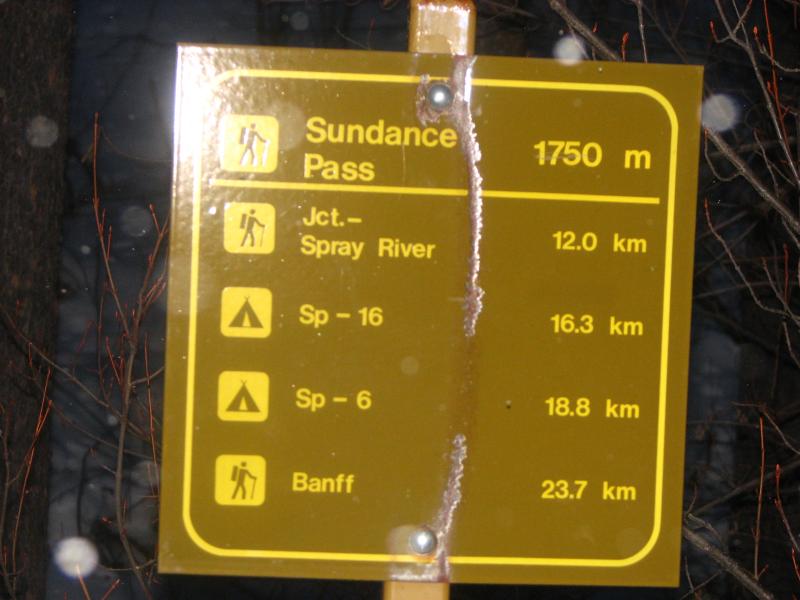 The height of the pass... well signed

Fantastic! You continue to amaze and inspire!

I put a track up and over Sundance Pass, and down to the Spray River trail today. Starting from the Cave and Basin, I skied out along the Sundance Trail, turning left towards Sundance Canyon at the junction with Healy Creek trail. ~600m later, the Sundance Pass trail branches off to the left. The trail heads up a treed ridge and eventually hits the bottom of the "Fuel Reduction" area on the back of Sulphur Mountain. The trail disappears, but just keep following the bottom edge of the clearcut, all the way to the far end. I did a few explorations down towards the creek just to see how the travel down there was, but it was a slow waste of time and I definitely recommend staying along the base of the clearcut instead of following my wanderings. The trail picks up again at the far end of the clearcut, and continues up towards the pass over an uncountable amount of fallen trees. There is sooo much deadfall on this trail, which isn't too surprising for an unmaintained trail. On average, ski penetration was a bit above the ankle but there were also tons of surprise pits of bottomless snow. Eventually I made it over the pass and started heading down towards the Spray River. There are a few steeper sections on this side. Two downhills requiring a careful sideslip down (can't pick up speed because of deadfall across the trail), and one uphill bootpack. Also, a few spots where taking the skis off to get over/around deadfall was more efficient than finding a ski-able way around. Eventually I made it down to the Spray River trail. I was really hoping someone would have broken trail up this way to make my day easier, but no such luck. 2.5km later, I hit the groomed trail and headed down towards Banff by moonlight/headlamp. A brisk walk across town back to my car finished off a long day!

PS none of the maps I found had this trail correctly marked. Government topo maps and GemTrek maps disagree about which side of the creek it is on, with GemTrek getting the first half right and the government map being more accurate on the Spray side of the pass. But neither were correct for the final few km down to the Spray River. Good thing some animals had walked the entire trail, otherwise it would have been tough to follow in some places! 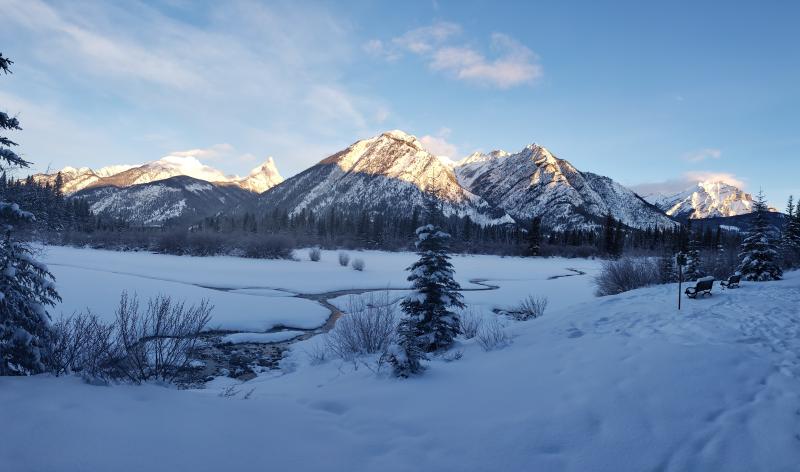 nice sunrise along the river 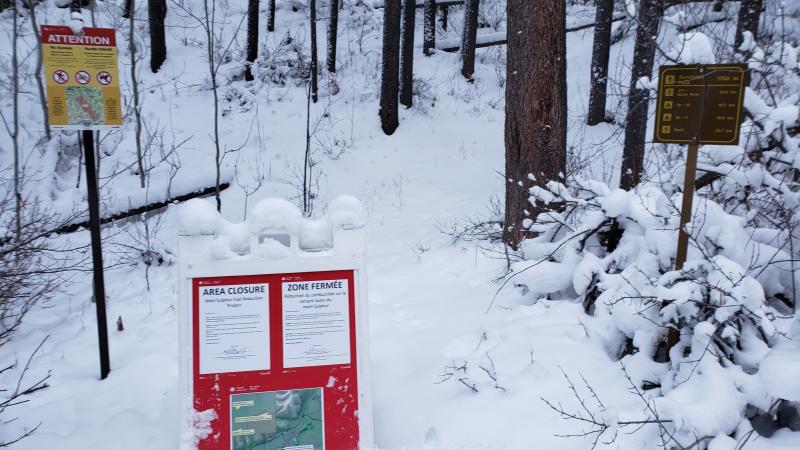 if you look/read closely, neither of these closures affect the Sundance Pass trail right now. 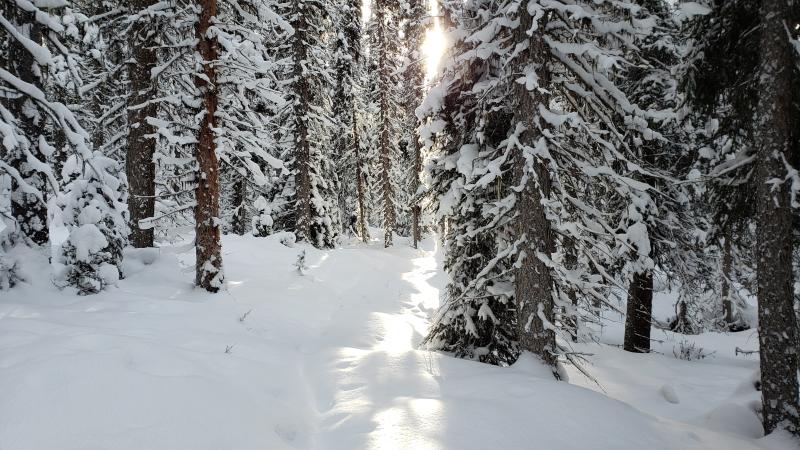 not a lot of views on this trail, but sometimes the sun filters through 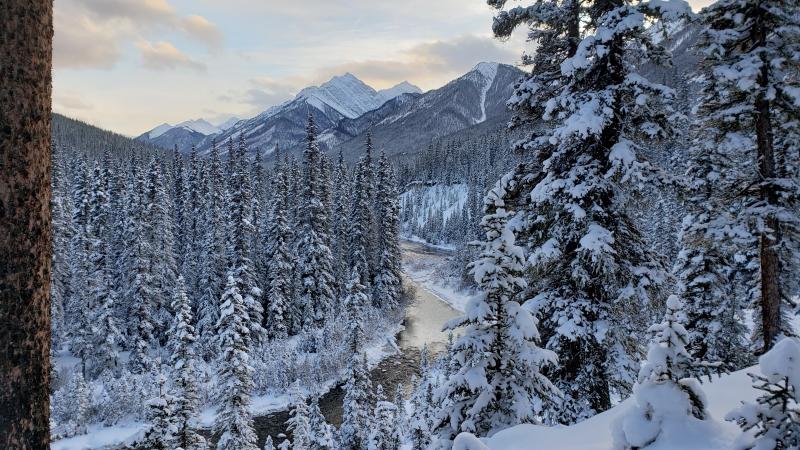 sunset over the Spray River