Wanted to add to my comment. It is good that the volunteers groom Kananaskis parks and it looks like they are doing a wonderful job. Too bad though that Kananaskis is pay to play. What about single Mom's stretching a dollar or other less fortunate people that need to sit on a beach in the summer- for free. Its not humane. Life has enough stress & we don't live next to the ocean with lots of free beach access. We have mountain lakes and now everyone has to pay to play.

I have a pass to the National Parks and that suits me fine. I don't want to contribute to the UCP either. Too bad, Kananaskis used to be close and fun and I enjoyed skiing there. Wonder what the Lougheed heirs think of what's become of their father's legacy?

Either some of the surplus money should go towards grooming at WBC, or going to WBC should not require a K-pass. They can't have their cake and eat it too. My preference would be for the former.

A lot of money raised for the Kananaskis Pass is already being wasted on advertising, hiring people to check for passes and other, what I call, wasteful unnecessary spending areas. This is all being done undemocratically.

If there is any good journalists out there, perhaps they could pull up a Freedom of Information request to find out where and how the money is all being spent and report on it on a yearly basis. The amount of money raised is excessive and excessive wasteful spending will be required to get rid of it or the money will be shifted to other government areas clandestinely.

Last year the UCP wastefully put up new Provincial Park signs on highways across this province which cost millions. They built a pipeline to nowhere at the cost of billions of dollars. They have wasted many millions of dollars on useless subjective panels for their own ideological preferences only to pay out their supporters on the panels with tax dollars. They allow companies to walk away from abandoning oil and gas wells which costs Albertans tens of billions of dollars. Alberta has lowered oil royalty rates over by 43% since the Premier Klein days which has greatly affected our collective wealth- judging by government debts and the amount of money in the Heritage Trust Fund which is a joke compared to Norway's Fund. The Alberta government is subsidizing cheap oil to the Americans by shipping it to the Americans well below market value rather than adding value to it here to create more wealth for all Albertans. The UCP is subsidizing foreign oil companies by the tune of tens of billions with carbon capture. Now the United Conservative Party will be subsidizing the nuclear energy industry in Alberta with tax payers dollars and Albertans will clean up that mess as well at your expense. Yet, the United Corruption Party can not find a small fraction of wasted UCP tax revenues to fund Kananaskis Park. That is what undemocratic "political brown snow" looks like.

The Kananaskis Pass goes to support many wasteful spending sprees including buying and supporting excessively wasteful big grooming snow cats that cost hundreds of thousands of dollars, guzzle huge amounts of fuel, are expensive to maintain and are very expensive to transport, when a $10,000 dollar snowmobile could provide the same trackset skiing service and be thrown in the back of a pickup truck for cheaper transport. For the capital cost of buying one $350,000 snowcat the UCP could have bought probably 35 snowmobiles. The smart thing to have done would have been to put a shipping container at various trail heads, like Watridge Lake parking lot, and keep a snowmobile and related trail gear there so that no transportation of equipment would be required in order to further "conserve" money. The trail crew member could then have just drive up to the trail head in an efficient hybrid or electric vehicle to save fuel costs, pull out some snowmobile fuel and trackset trails without wasting time loading and unloading snow cats or snowmobiles. This sort of thing is done in other jurisdictions. The United Conservative Party knows nothing about being conservative with tax dollars. They are conservative in name only. They should have been named the United Wasteful Party instead as that is what they are.

The government logs forest in Kananaskis Country and has gas developments in the region. The proceeds of the resource development revenues in the region should be directed, in part, for the use to provide universally free access to the Kananaskis as a continued part of the Alberta Advantage.

The prime reason not to keep the Kananaskis free for all is the wealthy Unitied Conservative Party supporters did not like the increased number of people using the region. The UCP devised a way to reduce the amount of people using the region by charging an entrance fee. This is keeping less wealthy Albertans out of the park for the benefit of the wealthier Albertans. This is a simple economics law. This Kananaskis UCP tax entrance fee could have been avoided in many ways but it was purposely put in to keep the the less wealthy out.

The Alberta Lottery Fund is made up of the government's share of net revenues from video lottery terminals, slot machines and ticket lotteries. These revenues total more than $1.5 billion each year, and are used to support thousands of volunteer, public and community-based initiatives annually. Without a doubt, the UCP could have utilized part of the increasing lottery fund to maintain Kananaskis as a free universal park for all Albertans. Some of the funds end up in the wrong hands as I have experienced and are wasted or stolen by private hands or private organizations.

The Government could also give every Albertan a free pass to Kananaskis and charge out of province tourists for the use of the park to generate funds, but I am not in favor of that as tourists are already spending plenty and it makes Alberta more attractive when parks are free. It is or was a part of the Alberta Advantage that the United Conservative Party is eliminating for the less wealthy.

In Norway, they have free education for anyone in the world (or at least they did a couple of years ago when I did some research). Surely we could have free entrance to the Kananaskis as Alberta is a much bigger oil and gas producer than Norway.

Nakiska ski resort, the Kananaskis Golf Course and other businesses could also be used to generate revenues in order to avoid a Kananaskis UCP tax. The government leases out Nakiska and revenues go into general revenues. They need to be redirected the revenues and perhaps the lease needs to be terminated to make way for even more revenues being directed to Kananaskis operations.

I can come up with numerous scenarios about how Kananaskis can be maintained as an Alberta Advantage universal free park for all. What we need is rule by the people in this province rather than rule by the UCP or NDP, which is a Non Democratic Party, so people like you can make the decisions. Rule by the people can easily be enacted by legalizing your right to introduce and vote on government bills (using a cell phone or other). A new Direct Democracy Party of Canada has just formed which will create great political change in the future and we need the same in Alberta so that the average Albertan can have a say on government decisions that affect your life, including taxes for walking on crown lands in the Kananaskis. This is what real democracy looks like, not the bogus fake democracy that we are sold at election time by our undemocratic government and the media.

Make Alberta A Democracy. This is the only way to reduce government corruption, lies, waste and taxes. Make way for bringing back the Alberta Advantage of free universal parks for all Albertans and so much more.

By the way, I'm replying via the free wifi system at Pocaterra hut right now.

The signal is very strong

Kudos go out to Ken and Duane and their fellow advocates for these forward looking efforts over the past 18 months.
Ken certainly doesn't need me giving him accolades, but he deserves them for not only this effort, but his life-long advocacy work in the mountains.

Above is a link to a recent CBC report about the Kananaskis Park Pass and how the funds are used.

Thanks to all the hard working volunteers and workers. A good day of skiing in Kananaskis country is a credit to them. 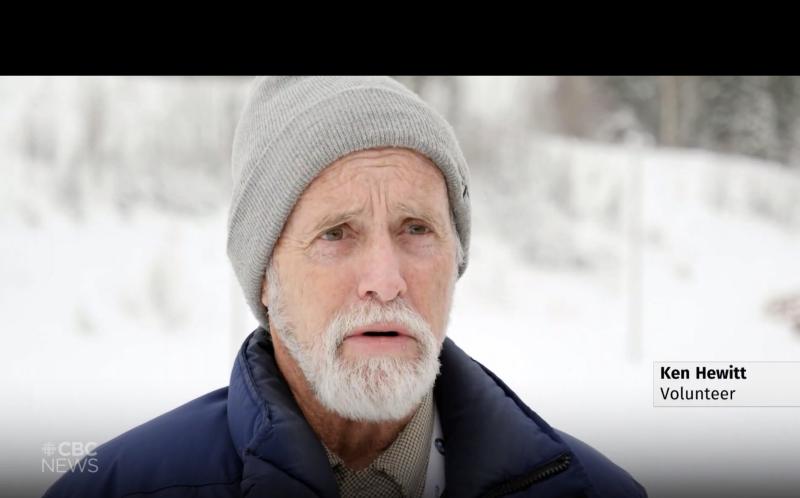 Thanks to the Volunteers