Here are a couple of photos taken yesterday, compliments of Helen Read and the Meanderthals! 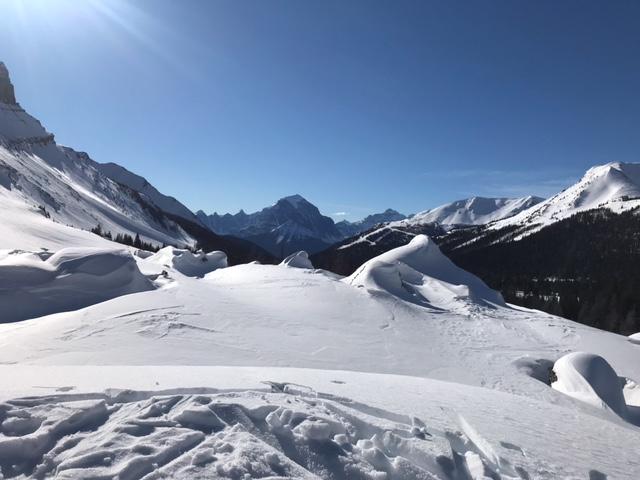 If the skiing from Fish Creek Parking lot to the top of Deception Pass was not so grip lacking slick, I would have likely skied to at least Skoki Lodge. I was hoping for Red Deer Lakes so I fell well short. This trip required my greatest effort herringbone skiing in my life but I actually enjoyed the challenge. Then I also screwed up my timing to watch Olympic XC skiing- by a week.

I used to take a lot of pictures in the film days, particularly when I was in photojournalism courses and had access to a photo lab, but I just have not gotten into the digital world of photography. I was also chocked when all my old SLR lenses would not fit digital cameras. Also, taking photos interferes with my speed on the snow and my skiing buzz.

I do own a cheap Canon digital camera that does not allow for interchangeable lens, and it has some bad and complicated operating issues. It also sucks back too many batteries for my liking. Also, it does not work in the cold. Maybe one warm spring May day I will bring the camera skiing after I am forced to go shopping for a new memory chip. The old SLR cameras ruled. The best ones did not require a battery and would work in any weather.

Fantastic Epic, Mr. Democracy! With your colourful descriptions, pictures are unnecessary, but would still be most welcome :-)

DECEPTION PASS TO NEAR SKOKI LAKES

The Ski Out at Lake Louise ski hill was hard packed and difficult to get grip on Swix 40 wax except in areas where the sun doesn't shine- yet. I had to do the herringbone boogie most of the way up. Snow speed was very fast skiing out at night. Ozone destroying space rocket fast that is. I would not doubt if I hit speeds of 90+ km/hour coming out in some spots. It was a moon light ski rush skiing out with the aid of my headlamp where the moon did not shine, although I was going to fast for the brightness of my light.

The skier trail from just above Temple Lodge was also very difficult to get grip but with the ups and downs in the contours, I was able to get some good polling to move along reasonably quick. Within about 1.0 km of Half Way Hut the snow became more grippy, but still fast. The sun was very intense skiing in although the air temperature was not real warm. The sun warmed up the buns very very nicely as it was directly behind me skiing up.

When I got near Boulder Pass I found the snow had been heavily scoured by the wind in recent days. Ptarmigan Lake had about 2 feet of snow scoured off the surface. The snowmobile track was much higher than the general snow pack. Ski penetration on the Lake is only about 1 cm on average, making for excellent easy ski traveling. The wind was behind me pushing me across Ptarmigan Lake towards Deception Pass, which is common and an energy reserving treat.

Deception Pass was mostly wind scoured but there were some nice smooth snow areas. The softer areas had 3 cm of ski penetration. The sun was being partially blocked by sun blocking airline emission trails which were acting as moisture attracting nuclei and forming clouds which was a bit of a piss off. Who gave the corporate airlines the right to take my passive solar sun warming energy rights away from me? My butt was getting cool and I wanted that solar sun energy back to warm it.

I was blown over Deception Pass by the wind on my BC 59 skis and in what seemed like a minute, I was down near Skoki Lakes. The winds were somewhere around 70 kph or so. The snow was less wind scoured on the Skoki side of Deception Pass. I was considering skiing down to Skoki Lodge, it would have only taken minutes with the ozone depleting space rocket fast snow, but I decided not to due to thinking I did not want to miss the men's 50km xc Olympic ski race. (It turned out the rece is next Friday at 10 pm PST on CBC). I timed my ski back up to the top of Deception Pass so I would watch the sunset. It was glorious looking up the Pipestone River Valley and seeing the sun colored red mountain tops as far as the Clearwater River area. The lighting was spectacular and worth dealing with -35c wind chills that frosted my exposed cheeks in a minute. When I battled my way over the pass in the heavy wind, I was gifted with a stunning sight of the top of Mt. Douglas beamed in fire orange light. Boulder Mountain was also enshrined in fire orange colors created by the setting sun beaming on the clouds created by the sun blocking airline trails. Pollution does make for nice sunsets in many cases.

I hung out at the top of Deception Pass until the colors disappeared from the mountain tops as the sun set. I skied some nice wind sift coming down Deception Pass as the skies began to get darker. A very brilliant 2/3 high moon gave me some nice ski lighting going across Ptarmigan Lake and to my dinner spot at Half Way Hut. After dinner I popped out of the hut when the skies had sparkling stars and the landscape was lit up by the moon. It was a classic fantastic moon lit ski through the meadows on my way back. Mount Richardson looked spectacular with the moon beamed landscape looking almost as bright as day.

Over the decades I have had some great classic sacred moon light skiing in this area, including skiing Fossil Mountain from the top at midnight in July on downhill skis. Hopefully I will be back up there in May for more moon light skiing.