The three downhill areas in the Park follow the Alpine Skiers Responsibility Code. The code is specifically for Alpine, as opposed to Nordic skiing, so won't apply outside those three areas.

None of this has anything to do with Parks Canada. 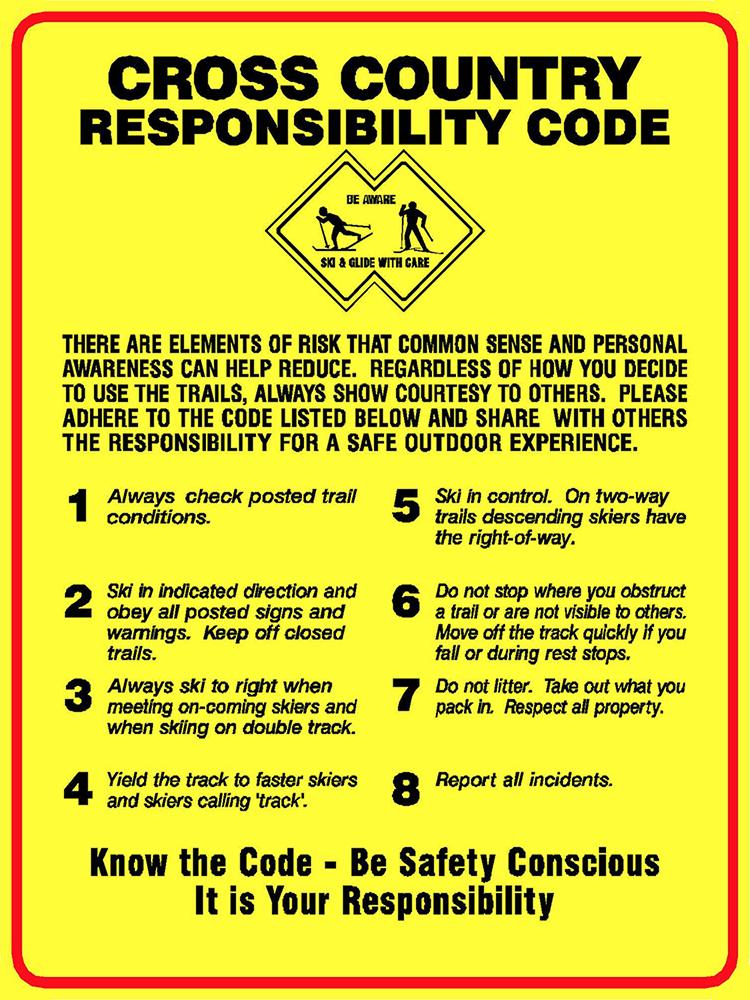 Howdy D.,
Just because you don't agree, doesn't mean you are right. This is a democracy!

I understand that according to the Parks Canada website that cross country skiers going down a hill have the right of way. I don't agree with that rule as it lacks legal logic particularly when there is a crowd skiing down a hill and hogging all the skiing room.

At downhill ski areas the person in front of you down hill has the right of way which is safer. It also eliminates confusion and makes it easier for courts to determine responsibility in the event of an accident. When a group of cross country skiers are hogging a trail going downhill, there is a serious safety issue. The skiers should be going down a hill in single file on the left side in order to give space for someone who is climbing up on the right. The person climbing up should not have to dive into the bush off the trail.

Parks Canada should adopt the Alpine Skiers Responsibility Code so that there are not multiple codes to be stored in people's heads. Any skier coming down a hill must be in absolute control at all times and be prepared to stop on a dime for safety to exist.

I can see a big liability situation with Parks Canada's xc skiing trail etiquette rules. The Alpine Skiers Responsibility Code preexists the Parks Canada XC skiing trail etiquette rules and courts would take that into account in the event of an accident. The Alpine Skier Responsibility Code was developed by many organizations across Canada and is well tested in court and millions of more people are accustomed to that Code in Canada than Parks Canada's trail etiquette rules which are much younger and likely untested in court. At downhill ski hills, the Alpine Skiers Responsibility Code is posted in many places. In the National Parks there is no such postings of trail etiquette which further increases liability. Furthermore there is a society norm in this country to keep right except when passing on the left. This norm is used on our roads, walking paths, bike paths and on the water in channels. Parks Canada should adopt the norm rather than being abnormal because abnormal does not stand up in court, particularly when there is a lack of public education.

Cross country skier etiquette is "downhill skiers have the right-of-way!"

Excellent winter like skiing all the way up to Stoney Creek. Great trackset skiing. Moderate speed coming out late at night. Some track damage in places by a bad skate skier. Expect wind sifted snow filled tracks in open areas, particularly on the first 1.5 km of trail.

Beyond Stoney Creek there is nice skier tracked skiing. Shortly after Elk Trap the trail was not visible in most areas due to wind sift. Ski penetration varied from just over the ankles to 1/2 way up the calf muscles. Slow to moderate speed trail breaking, depending on the aspect. I skied to within roughly 2 km of the Cuthead Warden Cabin.

At about 9:30 pm, the temperature was -3c at the Stoney Creek Warden cabin with very light snow falling. Skies were partly cloudy.

The Parks Canada trail etiquette rules are confusing and suck real bad. People are very confused as to the rules for skiing on xc trails and that is understandable. A lot of groups were hogging the trail today. Parks Canada trail etiquette rules should be such that skiers stay to the right, no matter what unless passing, just like car drivers, mountain bikers in every other place in Canada, hikers and walkers etc. I was zig zagging between people in groups today that were coming down hills. Those coming down hills should not have the right of way. People in front of you should have the right of way just like in the Alpine Skiers Responsibility Code that has been out since the 1970's. Cross country trail etiquette should be the same as downhill skiing etiquette and Canadian driving etiquette. If skiers stuck to the right when someone is approaching, it would be safer as it is the norm in our society. Clearly Parks Canada does not know about the "staying on the right except to pass" Canadian safety norm.