I'm using Black Diamond kicker skins that I got from MEC about 10 years ago for my 180cm skis. BD still sells them (with some design changes), but it looks like they're out of stock at the moment - https://www.blackdiamondequipment.com/en_CA/product/glidelite-mix-kicker-50mm/. You get them at the width you want, and then cut them to the desired length. I find they stick better if you round the trailing ends and add an extra thin layer of glue for the trailing 5cm or so.

I find they work really well in most conditions (see my Mar 28 report). Because I cut them for my 180cm skis, they're pretty long on the 140cm Little B's and I can climb at a steeper angle than if use them on my 180cm skis. But they have great glide and I like to keep them on for narrow and/or steep descents to better control my speed, or if I'll be climbing again within an hour or so. So I left them on descending upper Marmot Creek because of the steep descent, and Lower Marmot Creek because I was going to head back up to Hummingbird Plume. I then took them off for the descent back to the parking lot. To prevent contaminating the skin glue, I would never use grip wax if I might be using skins later on. For my trip yesterday to O'Brien Lake, I kept them on the entire day. I could have taken them off for the last 2.3 km on the Boom Lake trail, but the trail was icy and the glide was great, so I just left them on.

I've found three problems with the skins: (1) You have to have a feel for how steep you can climb without backsliding. After you backslide a few times, the tails peel off, get covered with snow, and are very difficult to stick back on. You'll have to tape them on until you can dry them. (2) In sticky and/or crusty snow conditions, snow can work its way under the leading edge of the metal plate which lifts it off the ski, causing more snow to pack in. You are now plowing through the snow instead of gliding. The new design has a plastic plate, but I don't know if that fixes the problem. (3) Sticky snow also sticks to the metal plate, but rubbing skin wax on the plate usually stops that from happening. Ditto for snow sticking to the skins.

If you want further info, ask SkierRoger for my email address. 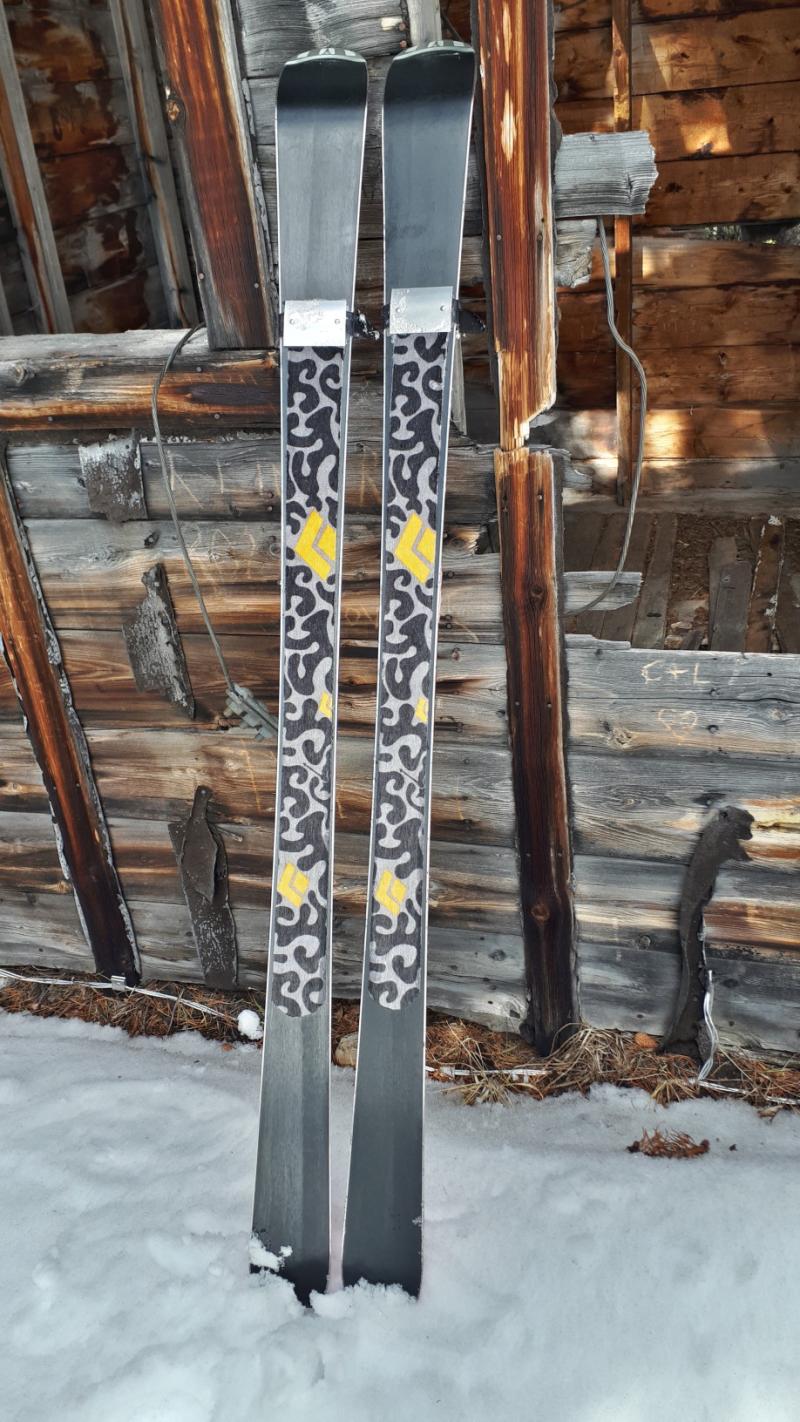 Hey Mike, Quebec is great where I live is considered the xcountry ski capital of Canada. Hundreds of KMs of groomed and touring trails right out our back door. The ski season is pretty short compared to Alberta but it's still great. I'm curious about your Kicker skins I haven't been able to find any other than the G3's. What kind are you using and how are they working so far.

Ski trail out our door.

Sorry Helen, that's not the trailhead. But I'll give you another clue. Thor's Folly can be found in the index of a guidebook, but it's an old guidebook. In fact it predates the main Internet era, which is probably why not even Google can find it!

Looks like Emerald Lake bathroom by the boathouse? Not sure I will be able to sleep awaiting Thor's Folly report!

Hi Jeff! I remember you. How are you enjoying Quebec? Thanks for the beta on how to connect between Marmot and Skogan! I'll check it out the next time I'm there. The Little B's and I just came back from another adventure today, but we're too tired and hungry to post a report tonight. It should be up tomorrow. In the meantime, here's a photo of the trailhead, and the name of the route we did is Thor's Folly. Can anyone figure out where we went? Chuck is disqualified because he already knows! 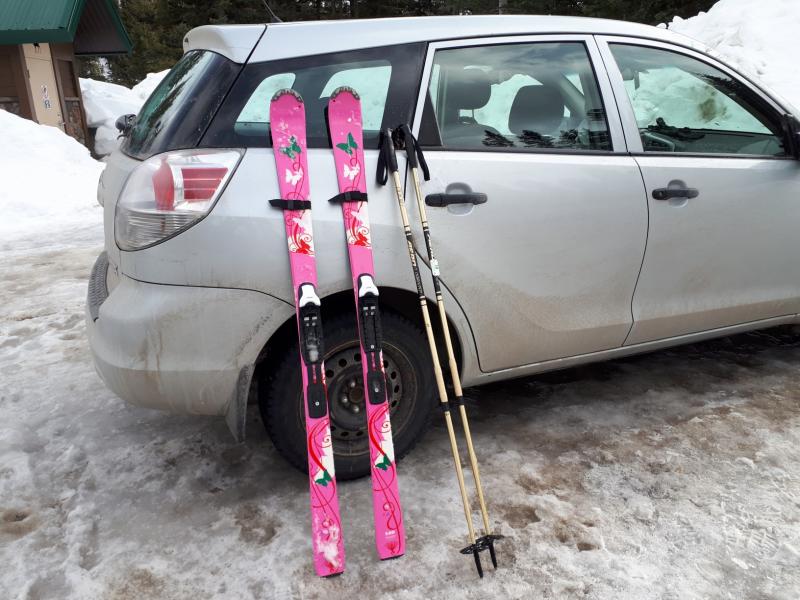 Great report and I echo everyone's comments on the skis. I live in Quebec now and short fat skin skis are the go to boards for exploring the woods. I worked for parks and groomed the Ribbon trails for forty years. I even submitted a plan to connect Marmot to Skogan Loop. The route you wanted to do was more or less what I wanted to connect. As you mentioned the steep ravine at the end of the NE road is problematic. I have done it on skis but I had to come down the ravine toward Skogan quite a bit. There is a traversing ledge on both sides of the ravine that is doable for the brave. The easiest way to find it is start on the Skogan Pass side about 400 m below the first Skogan Loop junction. Basically it's at the start of the short steep climb before it levels off at the junction . If you head towards Nakiska you will find wider gentler canyon walls, as you pick your way across you can connect to the old road and down onto Marmot. It's been years since I've been in there but it's lots of fun to explore.

You have a BRIGHT future on those skis.

Thoroughly enjoyed your post Mike W, especially since we reckoned Marmot Creek last summer ending up at eventually at the upper mid mountain Lodge. Wish I'd seen those pink beauties at Switching Gears, and glad you delighted us with this report. You also made up for all the photos I have never posted....maybe Chuck will teach me before next season!

Photos 7-12 from my trip report 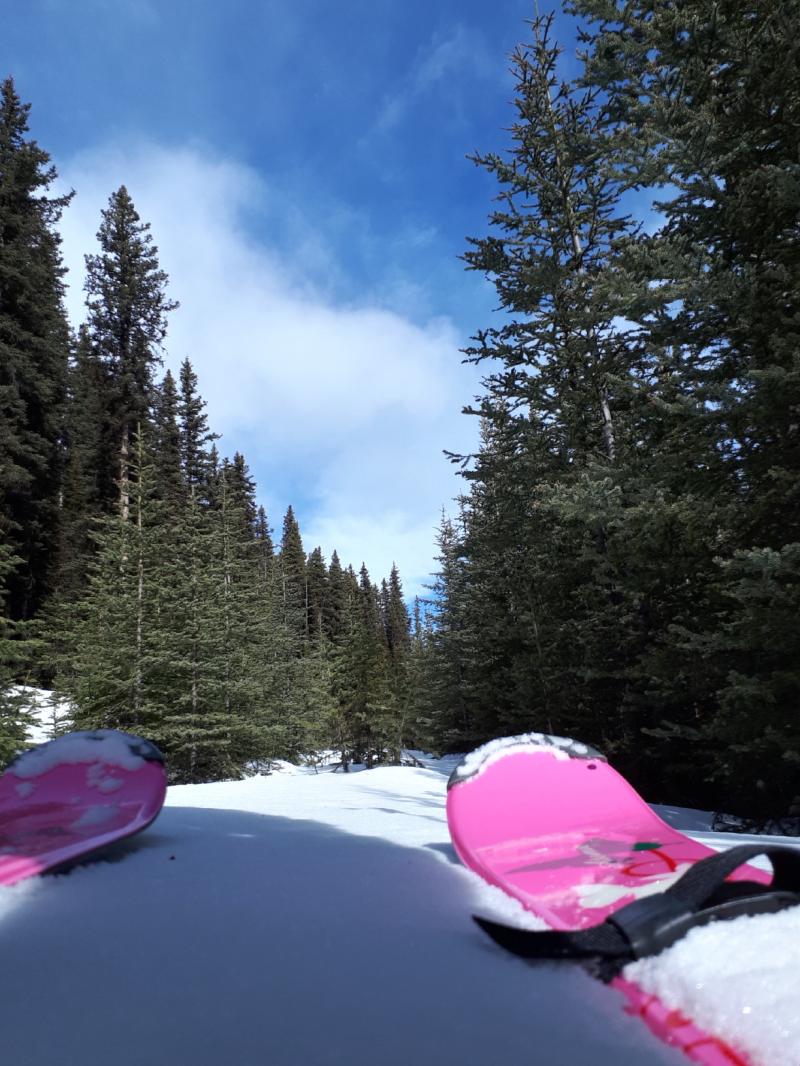 Trees start to block the road 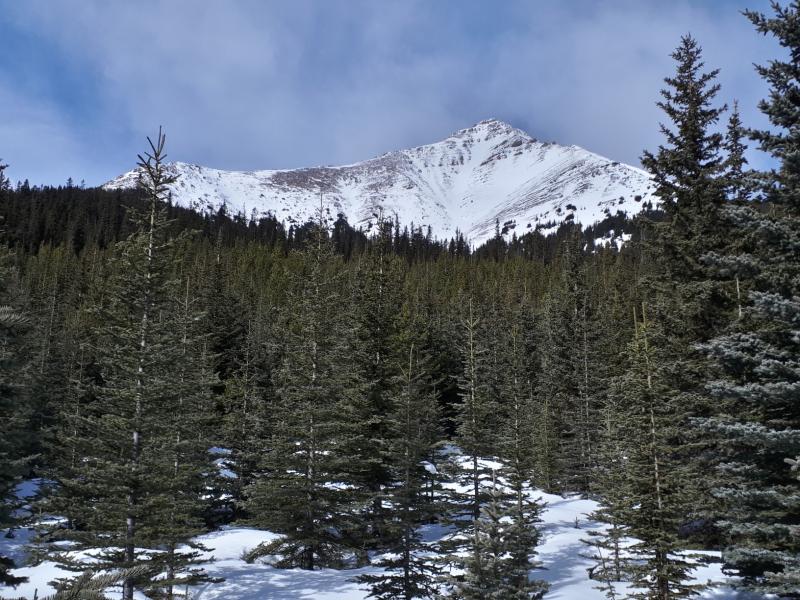 Mount Collembola. At this point you can't see the road for the trees! 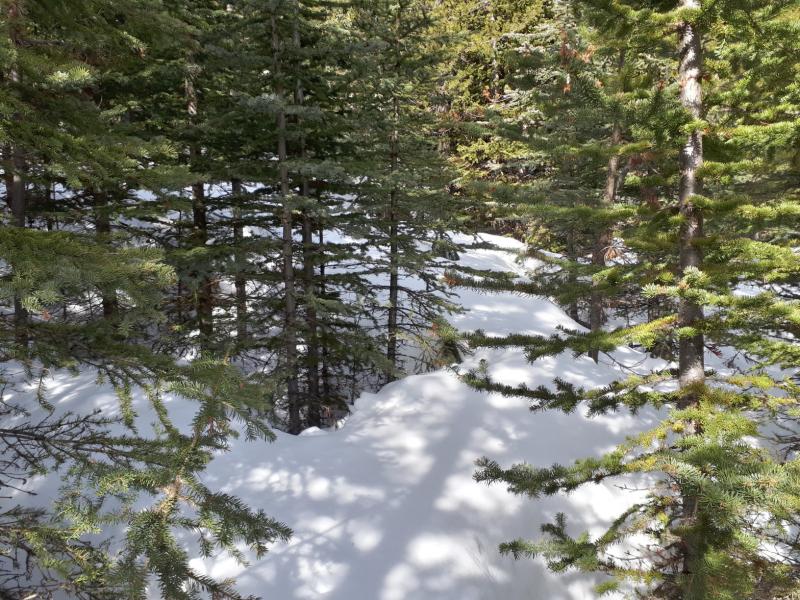 Forced up the E slopes of Collembola through dense trees 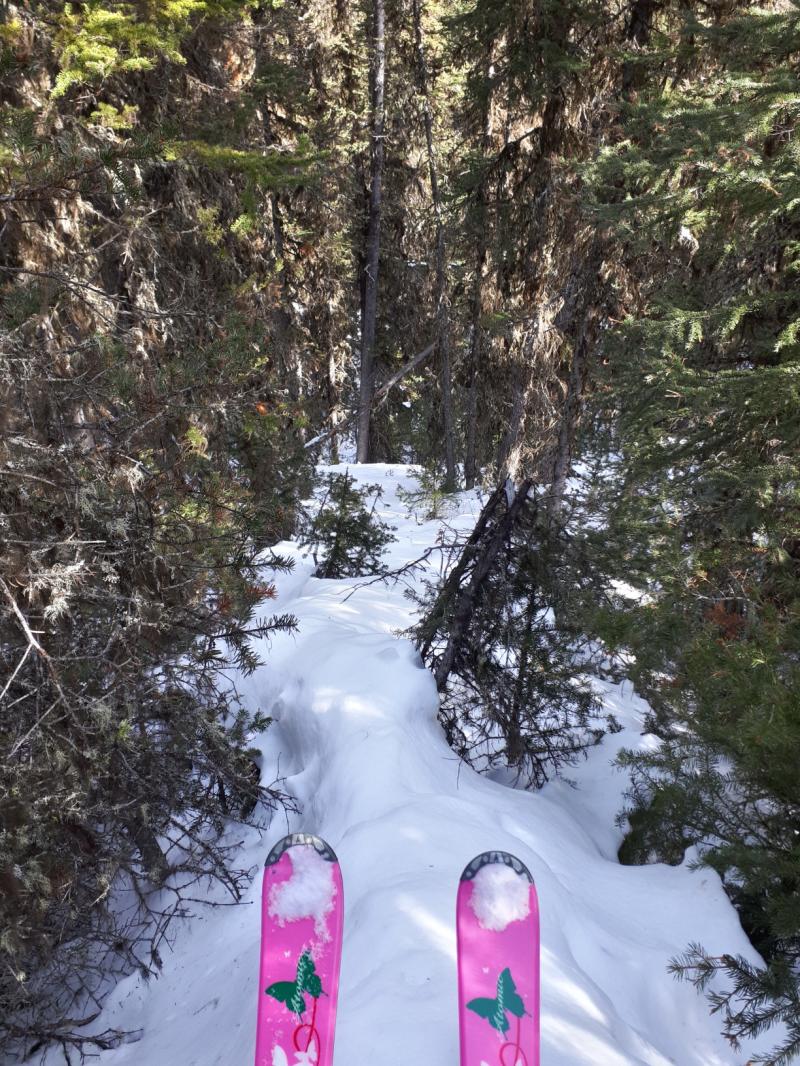 Looking down the 40-degree ravine, much steeper than it appears! 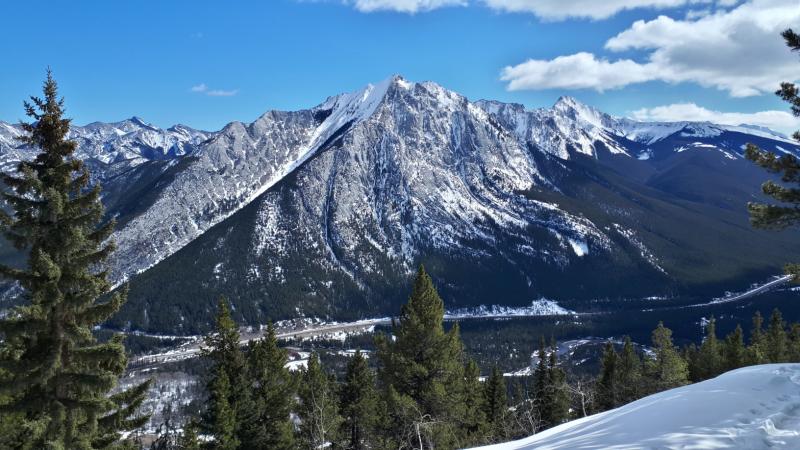 Me and my Little B's

About a month ago during a visit to Switching Gear in Canmore, I scored a pair of the highly coveted but rarely found 2006 Atomic Balanze "Little B's" in Special Edition pink, with the famous green butterfly graphic prominently displayed just aft of the tip! (Photo 1) They're metal-edged light touring skis specially designed for high manoeuvrability in dense trees and narrow trails. The 140cm length and 107-70-95mm profile suited me perfectly. No bindings had ever been mounted on them. Despite their astronomical price ($25), I decided to splurge and snatch them up. Though some readers with democratic leanings may extol the virtues of long and narrow touring skis, short and fat is definitely the way to go in constrained terrain.

I finally had time to mount a pair of NNN-BC bindings I had on hand and was eager to take these babies out for a spin. After reviewing topographic mapping and satellite imagery in the Skogan Pass area, I decided on my objective: Skogan Pass from Nakiska via Marmot Creek. I had no first-hand knowledge of the area, but I plotted out my route (photo 2 in red) following creeks and old logging roads, meeting up with the Skogan Pass Loop (photo 2 in blue) about 500m W of the Vista View (redundant name!?) picnic table. I also got an elevation profile using GPSVisualizer.com, that showed a steady incline never exceeding 15%.

I picked Monday March 21, the first full day of spring, for my adventure. It was -2C at my 0930 departure and stayed there throughout my ascent. I started with mohair kicker skins. I successfully ran the gauntlet of Nakiska checkpoints and fencing (if they're still there) by parking at the NW corner of Lot 4 North and cutting through the trees to emerge on Hidden trail at the base of the Olympic Chair. The next obstacle was traversing what appeared to be the blind landing zone of a massive jump near the bottom of the Powderface run. (Photo 3 - Note the brown XC Trail sign on the far side of the ski run at the right edge of the photo.)

About 1.3km along Skogan from the Hidden/Skogan junction, you turn left onto Marmot Creek Road. (Photo 4 - Note the small AltaLink sign on the wooden post at the right of the photo.) There were no existing tracks when I arrived. (I took the photo on my return.) Reset your tripmeter here! I followed the road and/or creek, whichever was easier. I was skiing on a thin crust base over isothermal snow, trying to stay in the shade as much as possible. Although the Little B's occasionally broke through the crust, it wasn't due to their short length. In fact, based on how easily my poles baskets were breaking through, I'd say my 180cm 89-60-78mm light touring skis would have been worse.

Mount Collembola comes into view about 750m along the road (photo 5), followed by a crossing of Marmot Creek at a washed away bridge site at the 1.2km mark (photo 6). As with Chuck's comment for his Mar 23 trip to the Giant Steps, the metal edges were useful for climbing the steep far bank of the creek. At the 1.6km mark, turn right at the T junction. (A left turn will take you to Marmot Basin.) The climb steepens somewhat and the trees close in (photo 7), but you get treated to a great view of Mount Collembola (photo 8). You're now in serious bushwhacking territory and the Little B's were loving it!

I continued ascending N, parallel to a N tributary of Marmot Creek, which for the purpose of this report I'll call Surprise Creek. At the 2.6km mark, Surprise Creek turns W, so I had to cross it in order to continue N. But instead of at most a 15-degree climb as indicated by the topo, satellite, and elevation profile data, Surprise Creek was at the bottom of a 30m-deep ravine with 40-degree sides! So I was forced to turn W as well, up the ever-steepening E slopes of Collembola with denser trees (photo 9). After about 100m with no sign of the ravine moderating, I had to choose between retreating or working my way down the ravine. (Photo 10 is pointing straight down the 40-degree ravine, with the front half of my skis in the air. Unfortunately the photo doesn't do the steepness justice.) Getting down was feasible, but it looked like a 1-way ticket. Once in the ravine there was a good chance I'd not be able to climb up either side and no guarantee I'd even be able to escape downstream. So I uncharacteristically let better judgement prevail and retreated. I kept the kicker skins on to slow my downhill speed, and to avoid using my ski edges which would have cut through the crust and into the bottomless snow underneath. Fortunately the wind had picked up and it clouded over more, which kept the crust intact.

I was disappointed not being able to complete my route, but elated at the performance of the Little B's. For consolation, I headed up to Hummingbird Plume Lookout (photos 11 and 12) before returning to the car. I can't wait for my next Little B adventure! 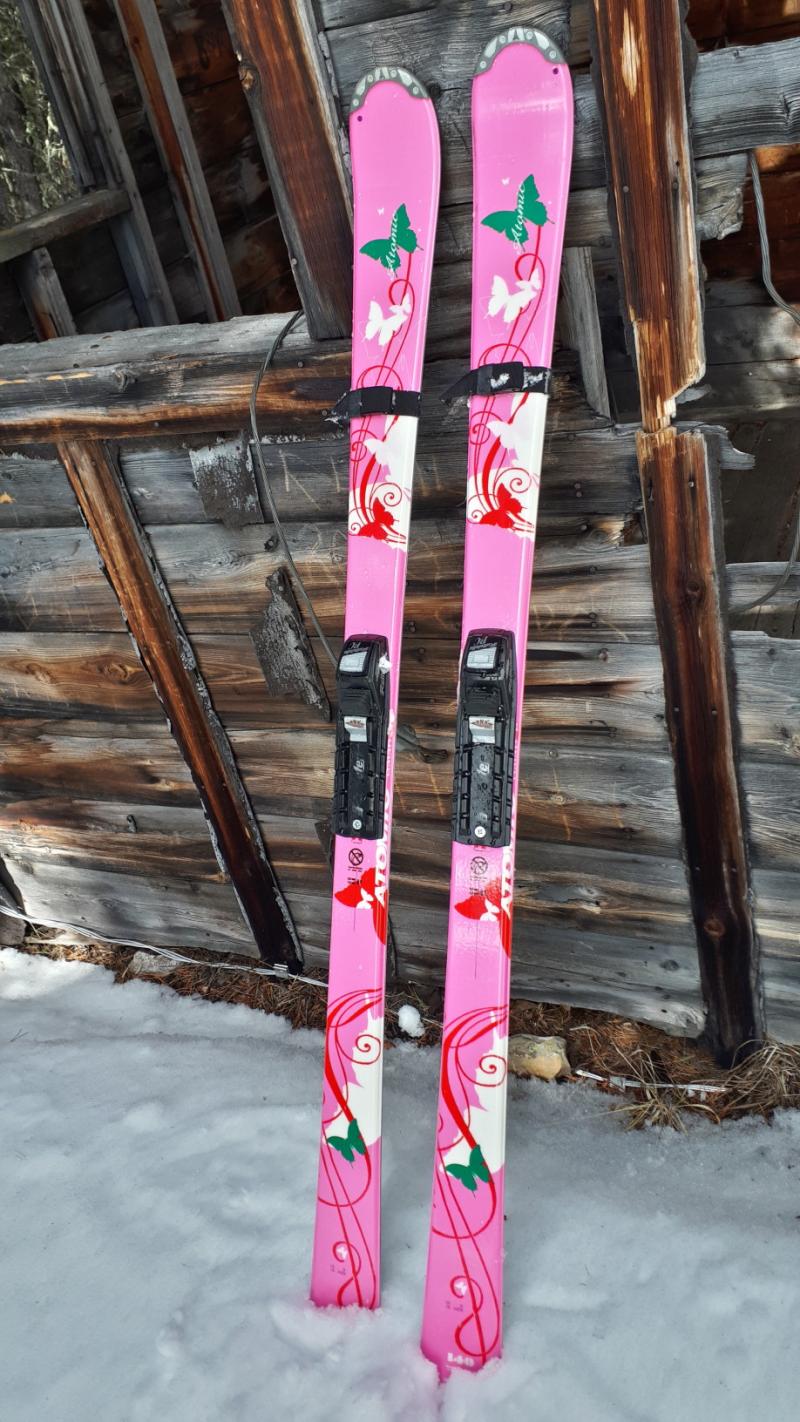 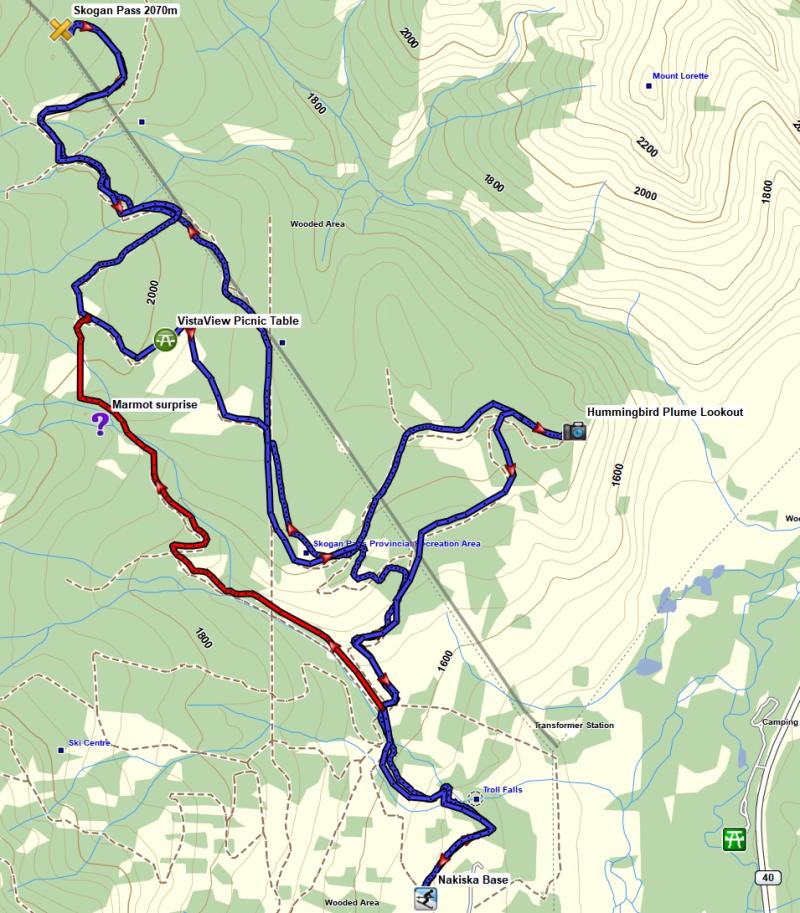 Photo 3: Why did the XC skier cross below a blind ski jump? To get to the trail at other side. 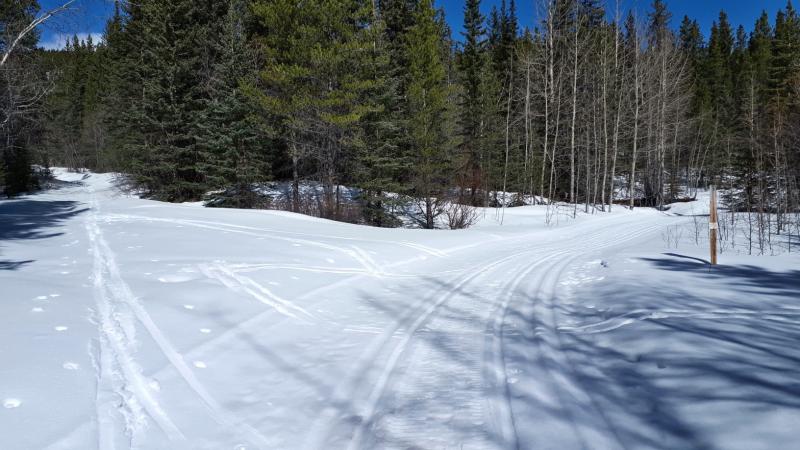 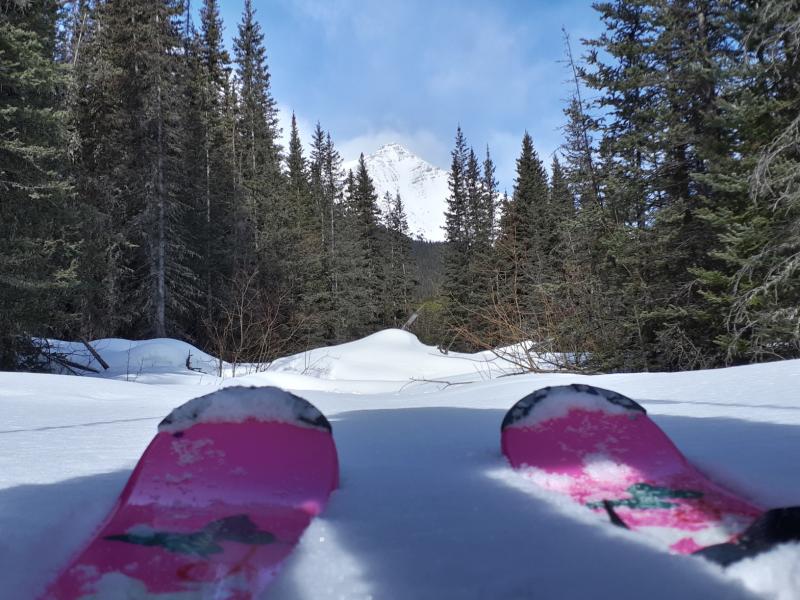 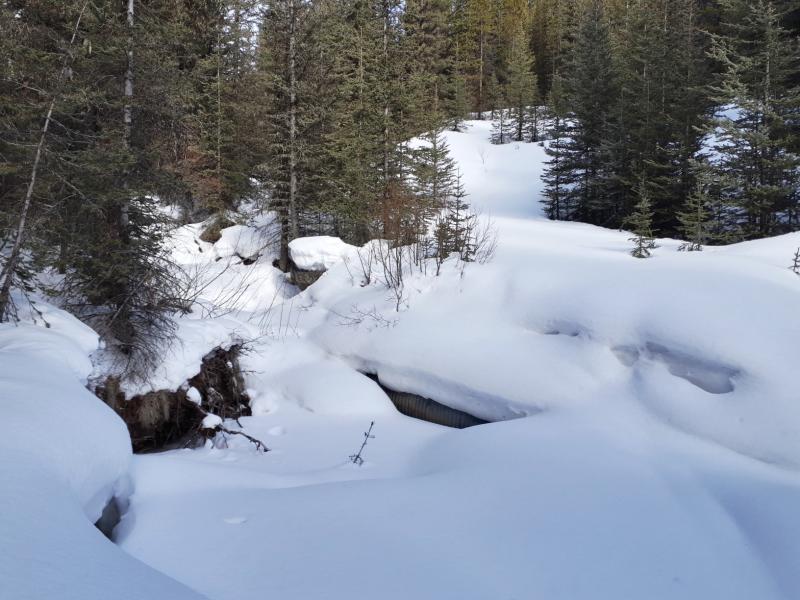