What a fun trip report and adventure! The little B's got pretty high up! Wow! Those skis are magical. 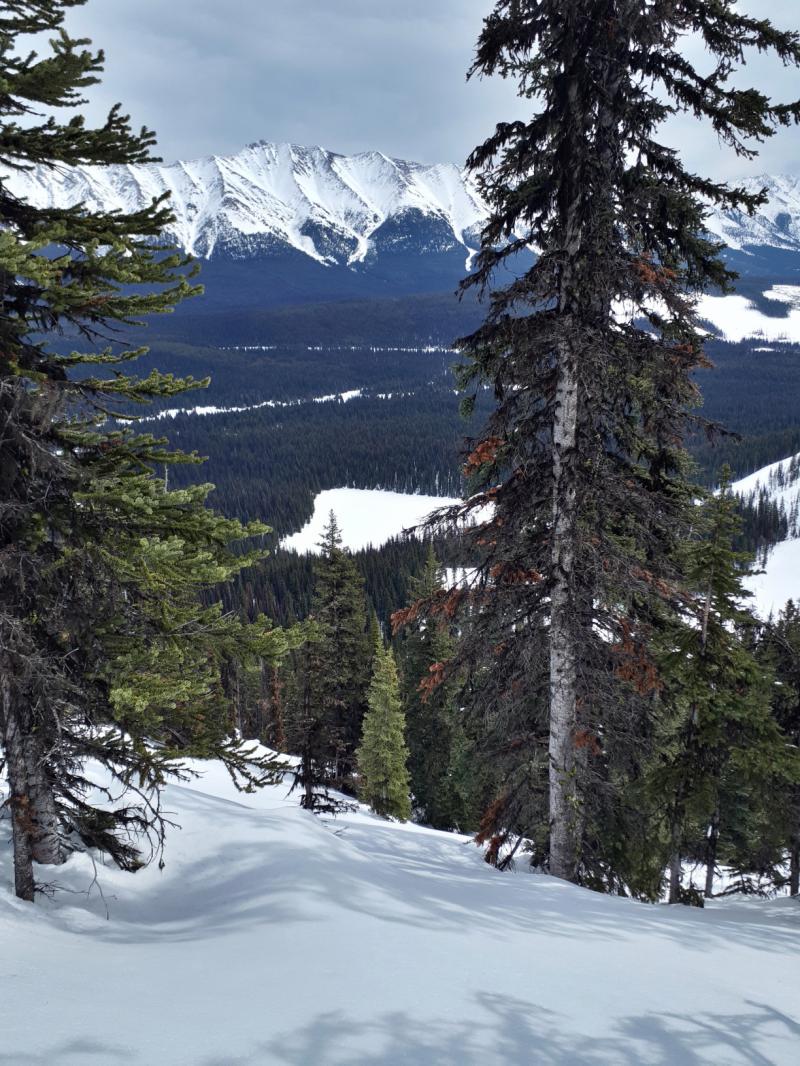 Photo 7: High up near Frozen Lake. The Elk Range at the back, with Fox Lake below. 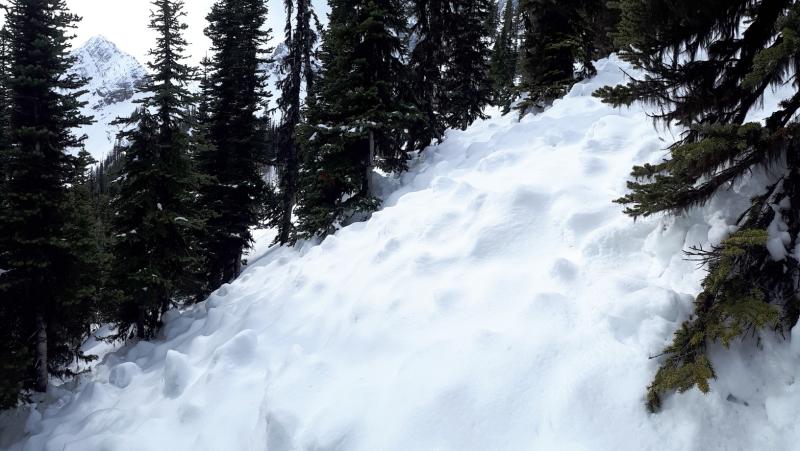 Photo 8: Not safe to proceed 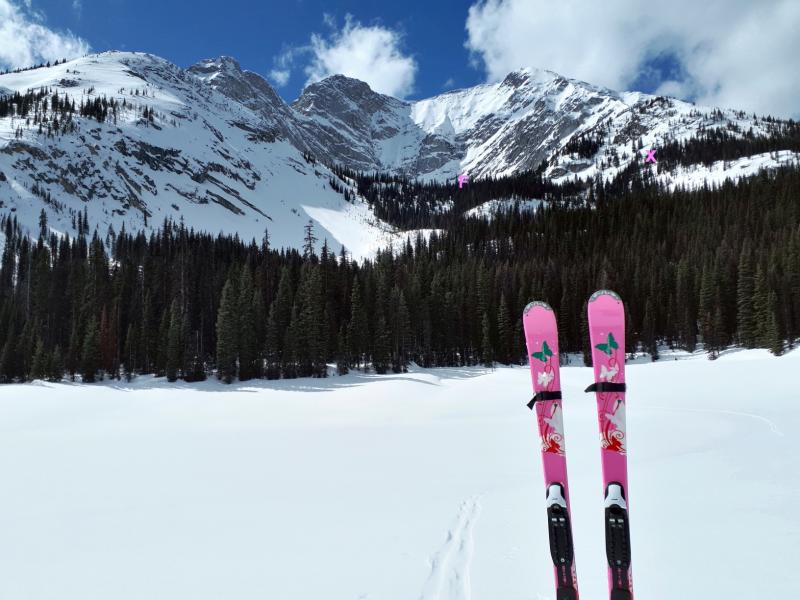 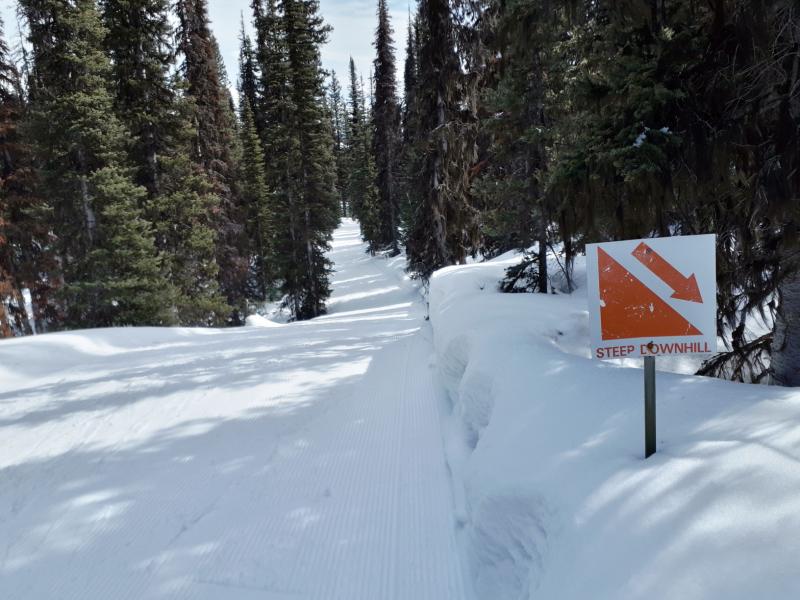 Photo 10: "Looks almost flat to me!" exclaimed the Little B's 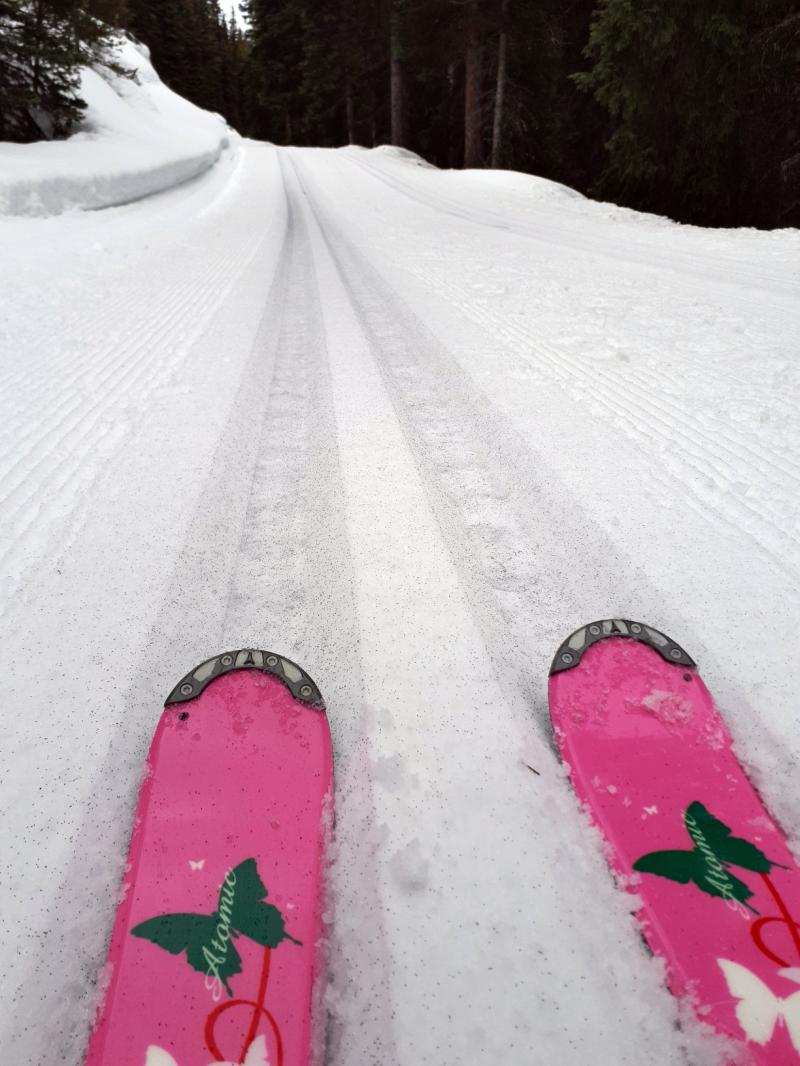 Photo 11: Collembolas. Note: The wide Little B's were delicately lowered into the tracks. 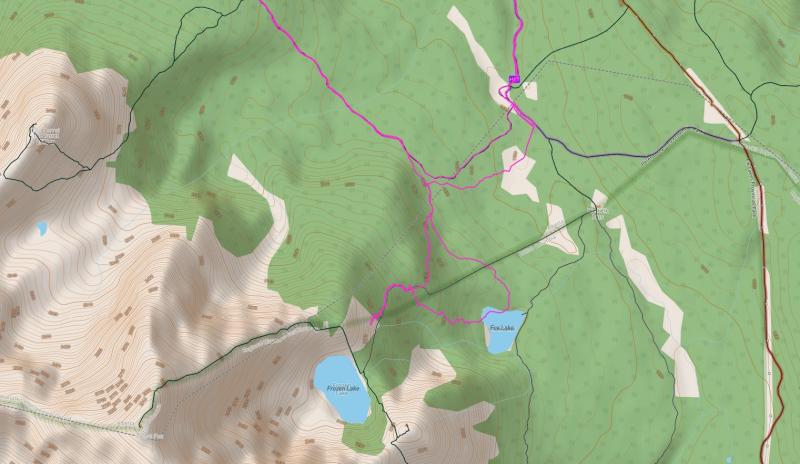 Above the top edge is Blueberry Hill on the left, and to the Elk Pass trailhead on the right.

Little B's on the hunt!

The Little B's were pretty tired after Sunday's "Thor's Folly" adventure and slept all the way back to Calgary. After a quick clean-up, I treated them to my best glide wax, Vauhti Pure One LD (Long Distance) liquid glide wax, corked and brushed until their bases shone like mirrors. Mainly to prevent clumping on our next outing. Yesterday's plan was to repeat Sara M's Saturday trip to Petain Falls, but to go via the Elk Lakes summer trail instead of following the power line. We left Elk Lakes parking lot at 0930 on fresh pristine grooming as Rainer reported yesterday. But the Little B's were unhappy. Their toes got squished trying to ski in the trackset, so we stuck to the corduroy. "This is so boring", they complained. "Can't we at least take the snowshoe trail instead?" (photo 2) I explained we had a long day ahead of us and needed to make good time to Elk Pass.

The avalanche closure on the Elk Pass trail was removed, and photo 3 shows that avalanches can and do occur. The dark area is snow and debris that stopped just above the trail, probably a day or two earlier. As we approached the Blueberry Hill junction, we moved off the trail and onto the hard crust of the adjacent creek bed. Shortly after we crossed the Blueberry Hill trail, the Little B's tips started twitching and vibrating in excitement. What was going on? I soon realized what all the fuss was about - wolverine tracks! (photos 4, 5, 1) with their characteristic triplet loping gait. They looked about a day old. The Little B's had never seen wolverine tracks before, so we decided to follow them. Note the blower powder in photo 1! The wolverine was climbing parallel to the Blueberry Hill trail. After about a km it looked like it might be going all the way up Blueberry Hill. We decided to leave the trail for now, and track them some more if we had time on the way back. But it was already clear we didn't have enough time to get to Petain Falls, so we decided to do some exploring nearby. Frozen and Fox Lakes looked like good objectives.

Rather than heading back down to the Elk Pass trail and following the Fox Lake and Frozen Lake trails up again, the Little B's convinced me to bushwhack across and up to meet with the Frozen Lake trail higher up. I some concerns about the terrain we'd have to deal with, but the Little B's would have none of it. As usual, they were right. They had no problem climbing in the soft snow in the steep terrain and manoeuvring the tight corners, sidestepping a bit when necessary (photo 6). Once we joined up with the Frozen Lake hiking trail, the gradient eased off on the final traverse to the lake. A lookout gave us a great view of the Elk Range with Fox Lake below (photo 7). Unfortunately, shortly after, the route crossed some avalanche slopes, at which point we turned back (photo 8). We followed the trail partway down, and then took a direct route to Fox Lake, enjoying some tele turns along the way. Looking back, we assessed where we had been (photo 9). "F" marks Frozen Lake, hidden behind the trees. "X" is where we turned around. Mount Fox behind. Note that the label colour has been tastefully selected to match the Little B's! Next time we'll try to reach Frozen Lake via the dense trees directly below the "F".

After a leisurely second lunch and with time on our hands, we angled back to continue our tracking of the wolverine. Soon the tracks joined the Blueberry Hill trail where we lost them. We went all way to the top hoping to see the tracks leave the trail, but no luck. Perhaps the wolverine had gone down the trail instead? The Little B's shed their kicker skins, looking forward to the fun of skiing down. "Steep Downhill!? Looks almost flat to me!" exclaimed the Little B's. (photo 10) On the final stretch back to the parking lot, the pristine white of the morning's tracks had been replaced by the typical spring invasion of Collembolas (photo 11). Note: The wide Little B's were delicately lowered into the tracks. No tracks were harmed in the making of this photo! Photo 12 shows our circuitous route, drawn in Little B pink. 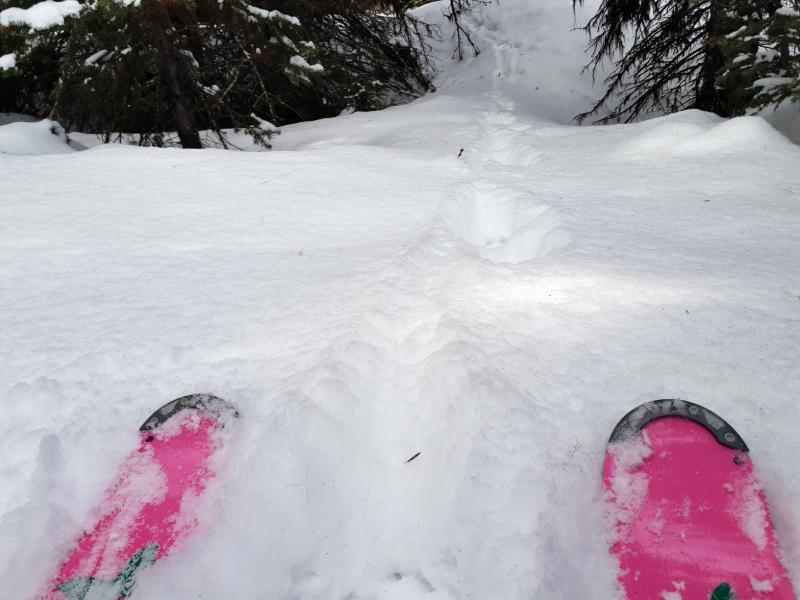 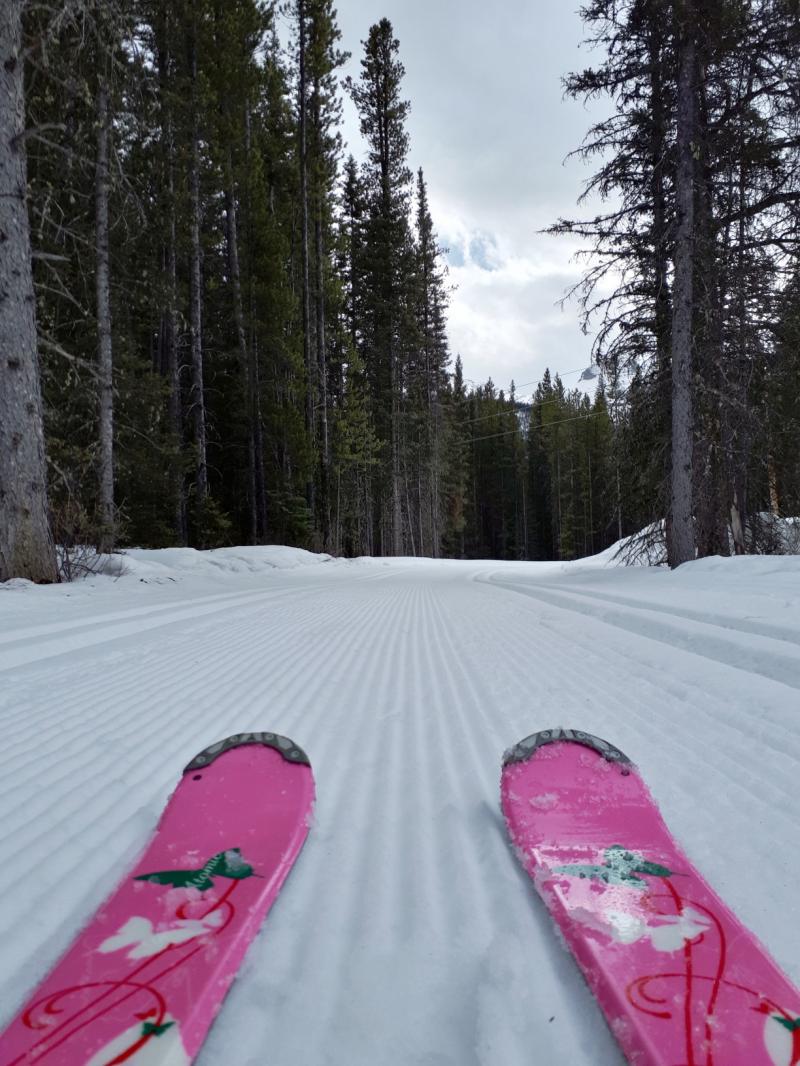 Photo 2: "This is so boring", complained the Little B's 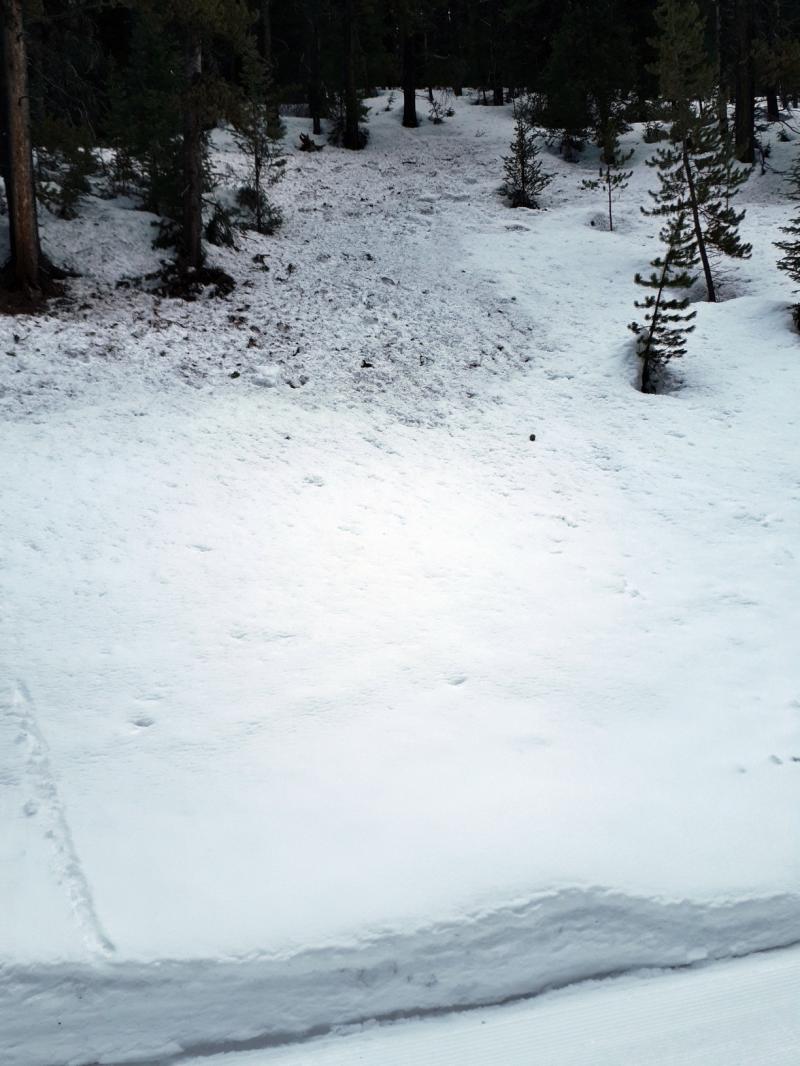 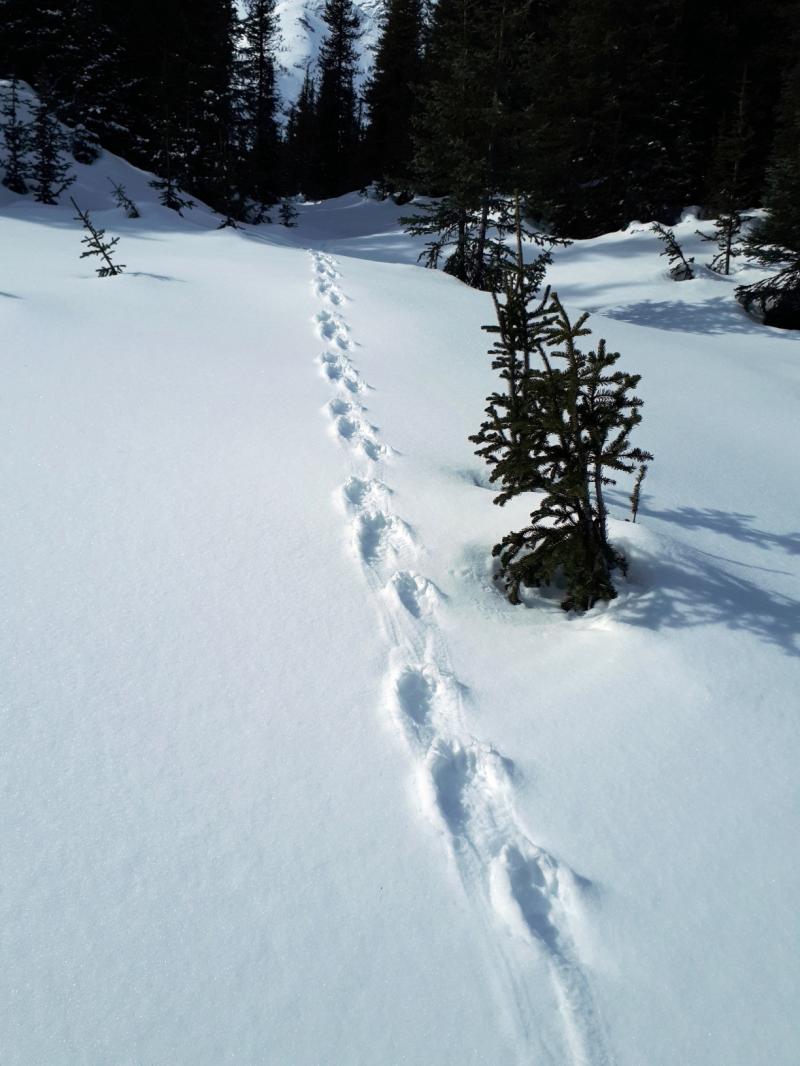 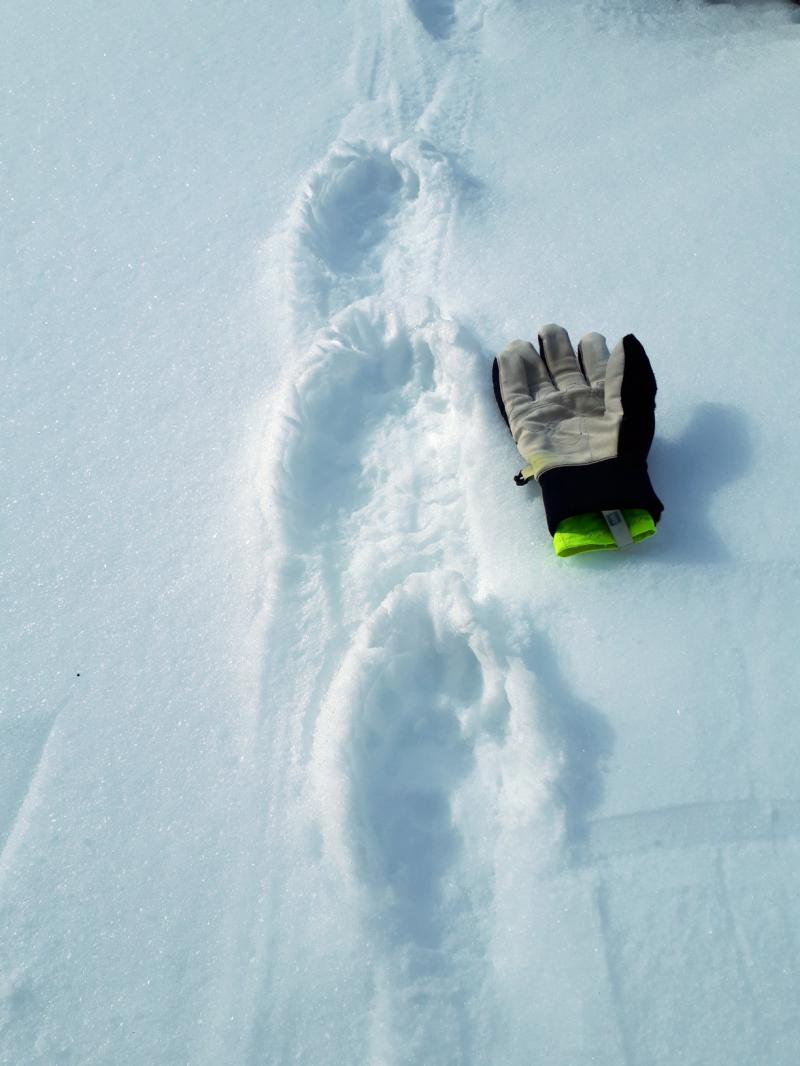 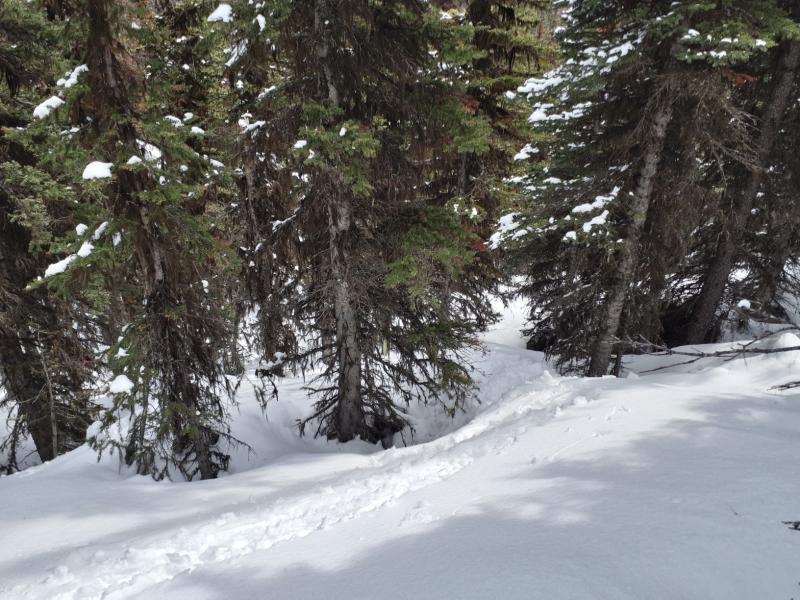 Photo 6: Sidestepping around a tight corner