Thanks for all that great info, Mr. Democracy! There were lots of those tracks and some smaller, so I wonder if it was a wolf pack...whatever it was, it sure helped me ski faster!

Thanks for the info DEM.

Your animal knowledge is on par with Mowgli of The Jungle Book.

The tracks in your picture are kind of difficult to interpret as the picture does not do justice for my eyes. I could also use information on strides. To me it looks like a wolf based on the size of the animal print compared to the ski boot reference. I think I see claw marks but I am not sure. If there were claw marks, it would likely be some sort of front foot of a canine like a wolf. The main track to me is somewhat bizarre looking, particularly the back pads. There is also a strange scuff mark beyond the toes too. Knowing the length of the animals stride can help in identification. Please take extra pictures next time which show the stride if possible. Put a ski or pole next to the prints so a person can get an idea of the stride length.

The track upside down in the pic is too hard for me to ID. Again it looks canine wolf like because of size, but I don't see claw marks. Perhaps snow filled in the tracks somewhat. Sooooo confusing.

I don't think the tracks are mountain lion/panther/cougar/puma/catamount as they seem really big for a typical Alberta putty cat. The cats are like black bears and don't show claw marks normally- unless they are slipping or need extra grip.

I have had more difficulty identifying animal tracks this year than any other in the snow as I am skiing along. Perhaps it has to do with the cold snow not giving nice impressions. Many of the tracks I have seen this year have had a skiff of new snow in them as well which adds to identification difficulties as I ski along.

One thing that has freaked me out a little this year is skiing over old tracks returning back to the car at night. They can look rather fresh with the LED headlamp lights as I am moving +10 kph skiing over the tracks. I have had to stop a couple of times to ensure they were not fresh and that I was not sneaking up on a Griz at night.

Some animals lose part of their foot in new modern humane traps that are not to humane when they destroy part of an animals foot unintentionally. I think that mainly occurs in bears though, but I could be wrong. Big cats could be affected as well but I have heard no evidence of that.

Some tracks of canines may be hard to identify due to breeding. Coyotes and wolves have been known to breed together and are known as coywolves. There could be dog mixed into them as well.

Grizzlies and polar bears interbreed apparently as well. On my land a few years ago I had a minature or pigmy sow grizzly with 2 cubs feeding on melons. The sow was not much more than a foot and a half high. The cubs were as big as mom. They had fur patterns unlike any bear I had ever seen, but they had the back hump. I have also seen one white grizzly bear in the bush as well. So animal tracks are also likely to vary a little too with genetic diversity.

Ski on with the wolves the way nature intended.

Jolynn and I took advantage of a nice day to head out to the Ribbon Creek area. The -2 degree temperature was just wonderful, in comparison to some of the colder days we’ve seen recently.

We didn’t have an exact plan for our day & ended up skiing Terrace, Terrace Link and Aspen. We found Terrace north immaculately trackset! Aspen was as fun as ever. Some other trails were a bit worn and you could tell they’ve been well used. Honestly though, that didn’t take away from a thorough enjoyment of our day. Compliments to the groomers for keeping this area well maintained through such a range of snow conditions.

I used Blue V40 wax which seemed to work fine. Jolynn’s skin skis worked well also: only minor slippage from what I could see. 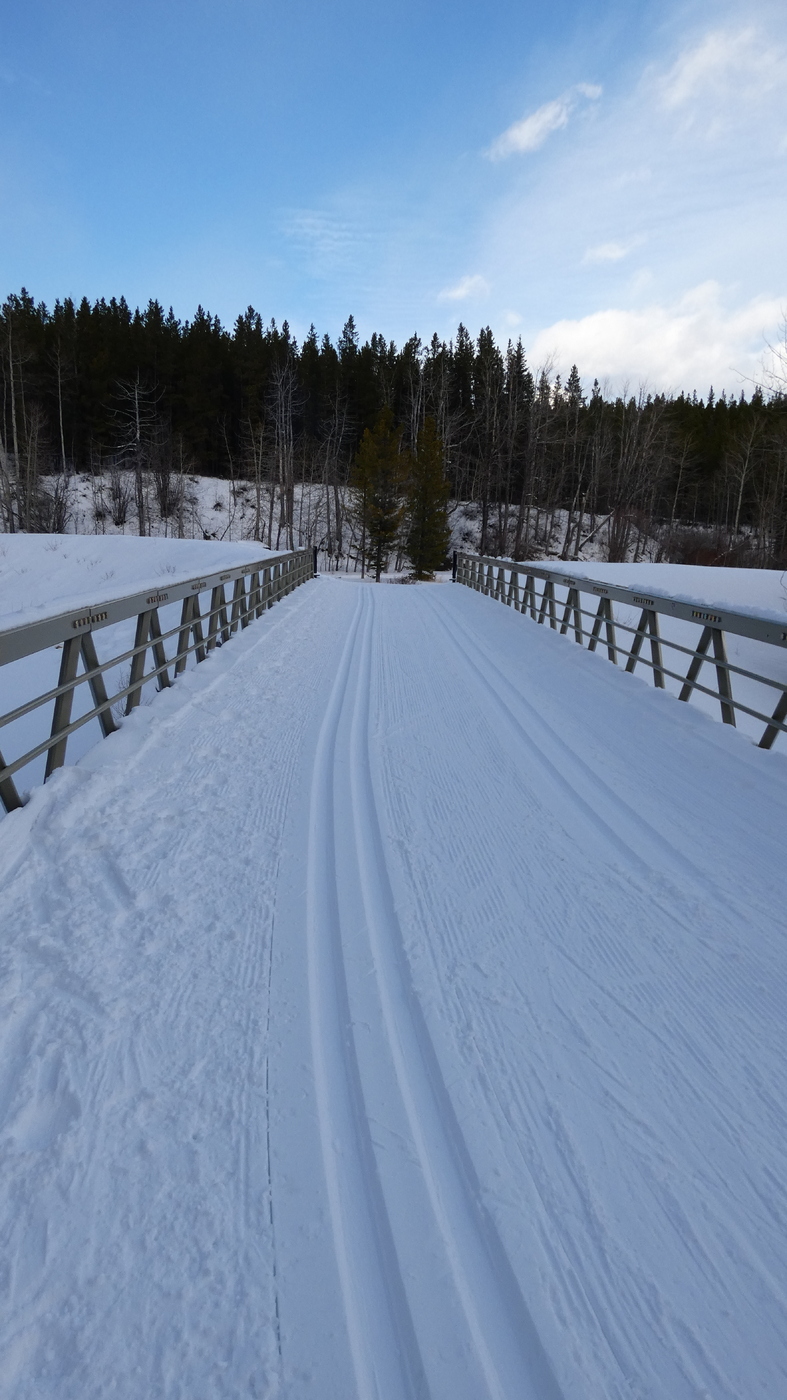 Terrace is in wonderful shape 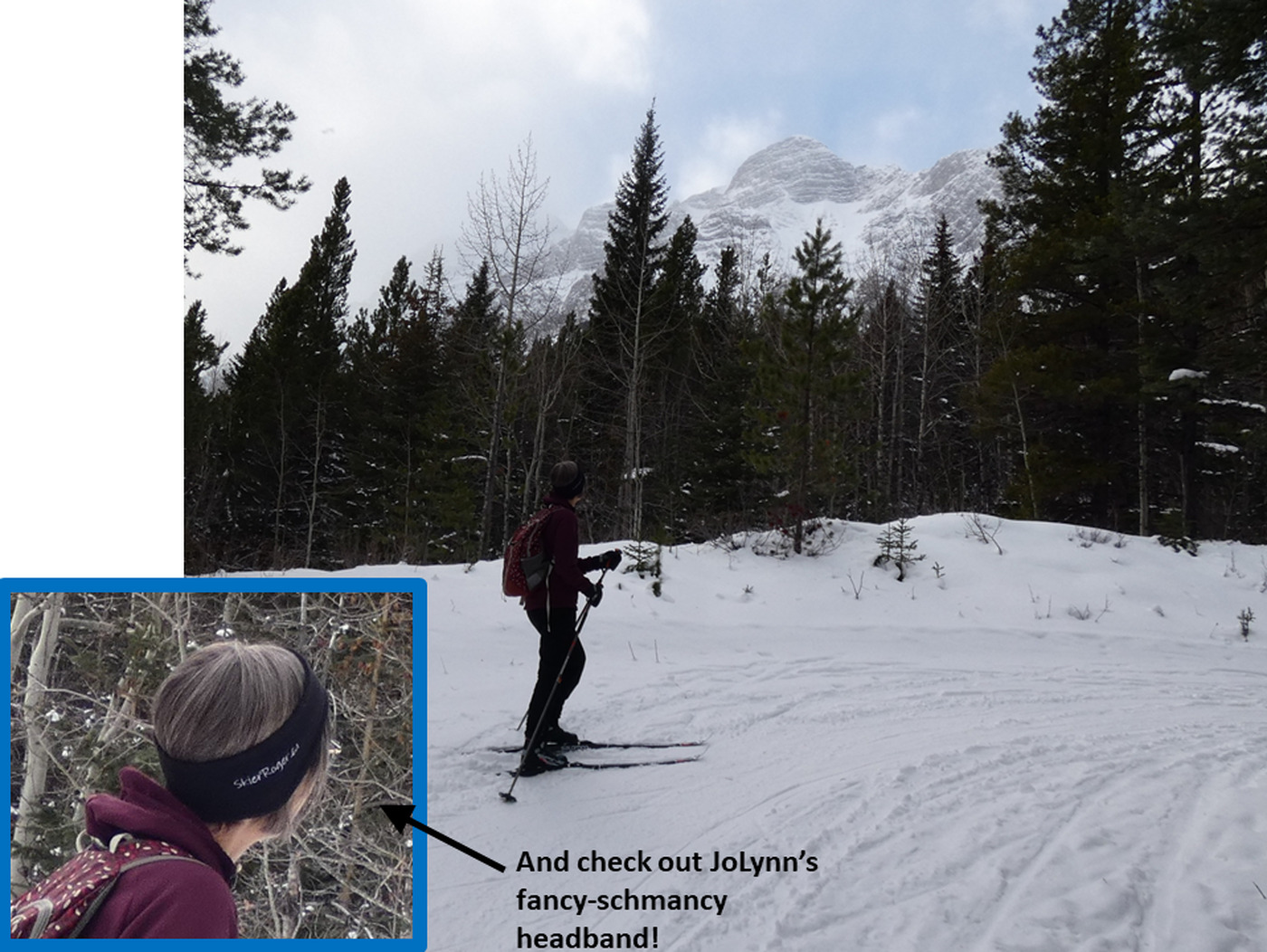 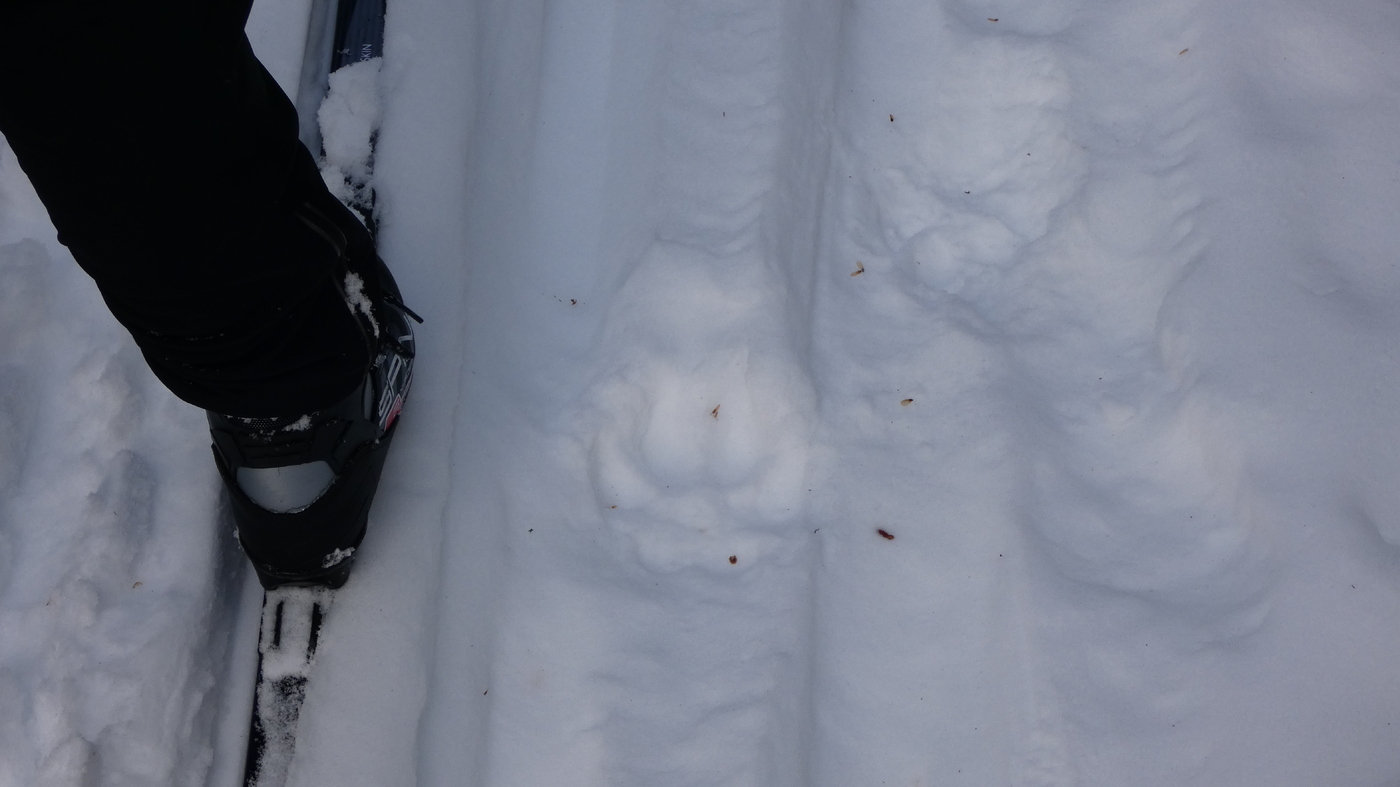 Any idea what this is? Wolf, Cougar?
Interesting to see how well Jolynn kept up with me after seeing that. 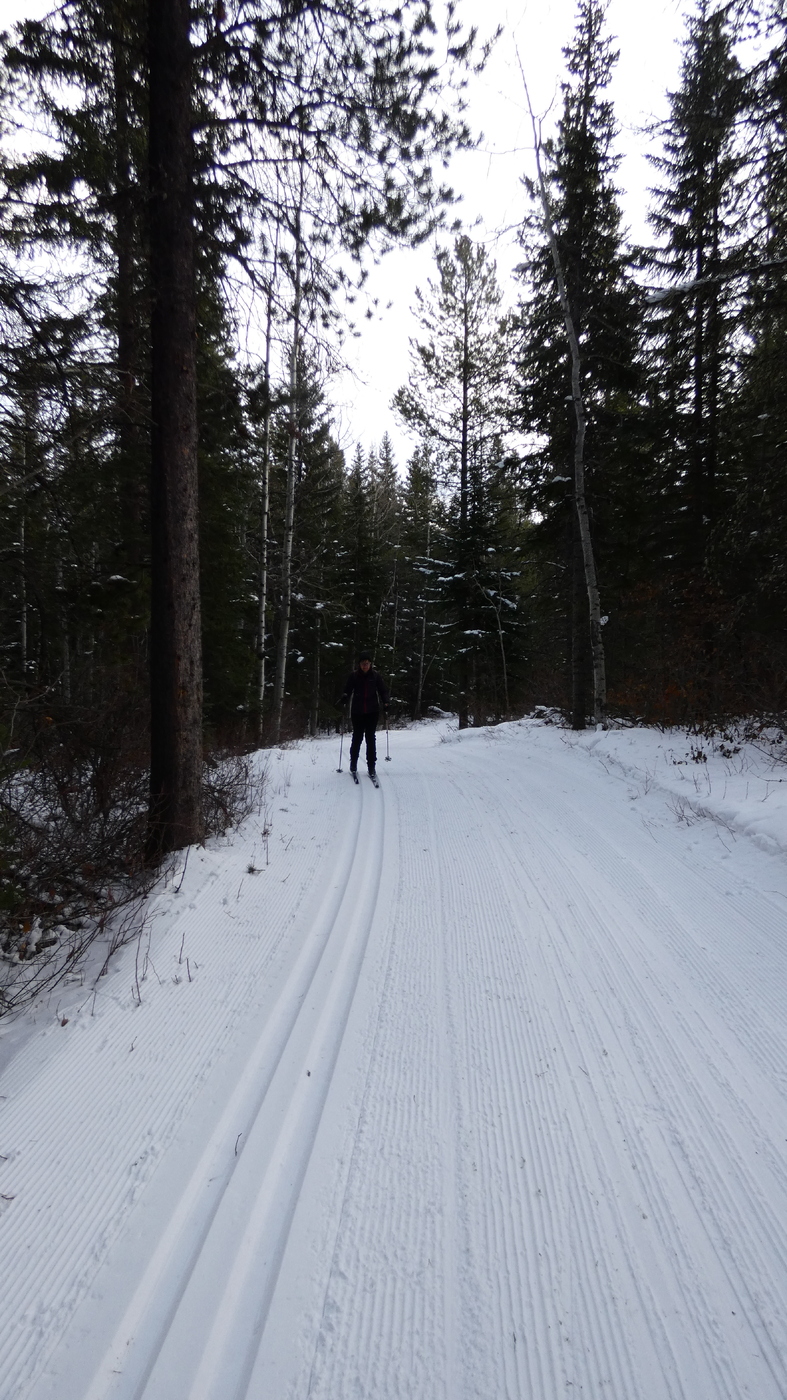