That joke about hooking up snow guns to hydrogen trains emitting water vapour had me laughing on the floor. You could sell that classic joke to Ron James as that type of humour is up his environmental alley. He would have to stop laughing before he pays you.

Now if CP would just rig up snow guns on those hydrogen trains for that water vapour...

Can confirm the "twiggyness". And there was a bit of mayhem when first joining the railway right of way (westbound): very thin uneven snow for a few hundred metres because they (CPR) had plowed. Tracksetters managed to make the most of it so we were able to avoid the mud and rocks. But altogether a good ski day. No wind, temperature -5 to -2, and short glimpses of the sun. About 1 cm of new snow overnight in the parking lot at Castle Lookout.

Five (or was it six?) trains went by. But only one while we were beside the tracks. 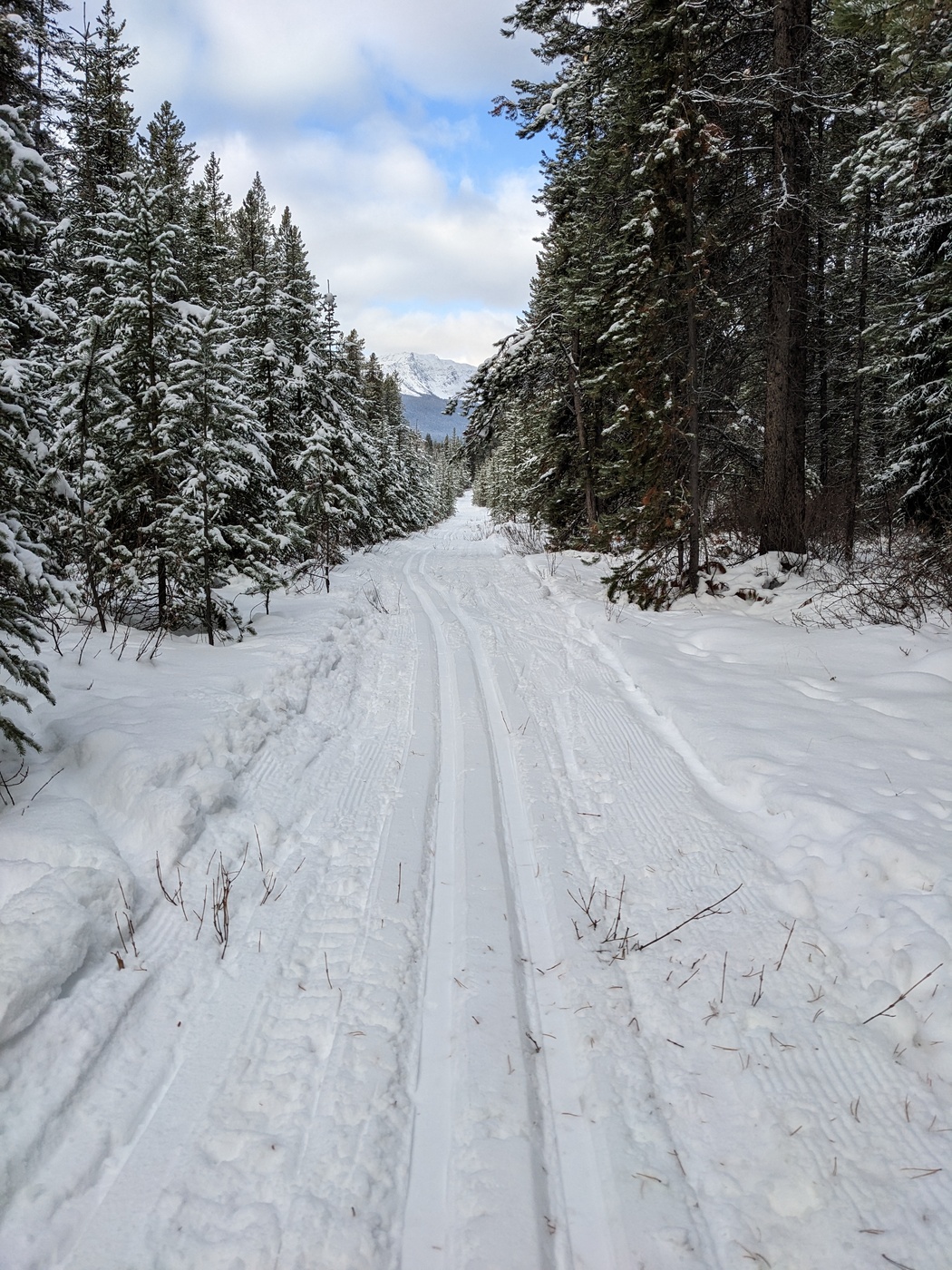 This shot isn't even representative of how many shrubs were poking through the snow. Sometimes we had to step out of the tracks to avoid an entire bush.

Castle mountain had a nice layer of cloud about halfway up.

Your photo displays the vanishing point or linear convergence photography technique with the skier trackset disappearing in the distance extremely well and it is a great shot particularly with the lighting.

Linear convergence also shows up with the train car sides in the distance but it is harder to see with the lighting. It must of been noise hell when the train went by.

I don't like to ski near trains as the toxic diesel particulate emissions laced with benzene are brutal on the lungs. This will change in the future when they switch to hydrogen powered trains. You actually may be able to see some of these new CP hydrogen test engines screaming down the tracks on a future day of skiing along the tracks as they are rumbling on the rails now. Instead of sucking up toxic diesel particulate with laced with cancerous benzene, you will be sucking up water vapour and that is a good thing although it could make the trackset slightly icy with the passing of a number of hydrogen train engines. Not a bad trade off though. That may make for a better ski base as well.

The trees cut on either side of the railway right of way also give a bit but incomplete linear convergence effect which draws the eyes further into the picture. Great lines in the pic drawing the eyes in deeper. Those clouds are well lit and look great.

The linear convergence photography technique draws the eyes up the picture and makes the mind wonder what you will find there.

I think my old photo journalism instructor would give you an A or higher for this linear convergence photo.

Twiggy tracks in the Castle area

No poetry today, just warm temps starting at Castle Lookout, beautiful scenery all the way to Bakers Creek, and good tracks that my fish scales liked. Well, I’ll qualify that: the tracks themselves were good but they happened to frequently run right over twigs and bushes. It was miraculous that my new skis weren’t scratched up! Otherwise, Helen’s report says it all, and I suspect Chuck will submit a good one soon as well. Early season in January! 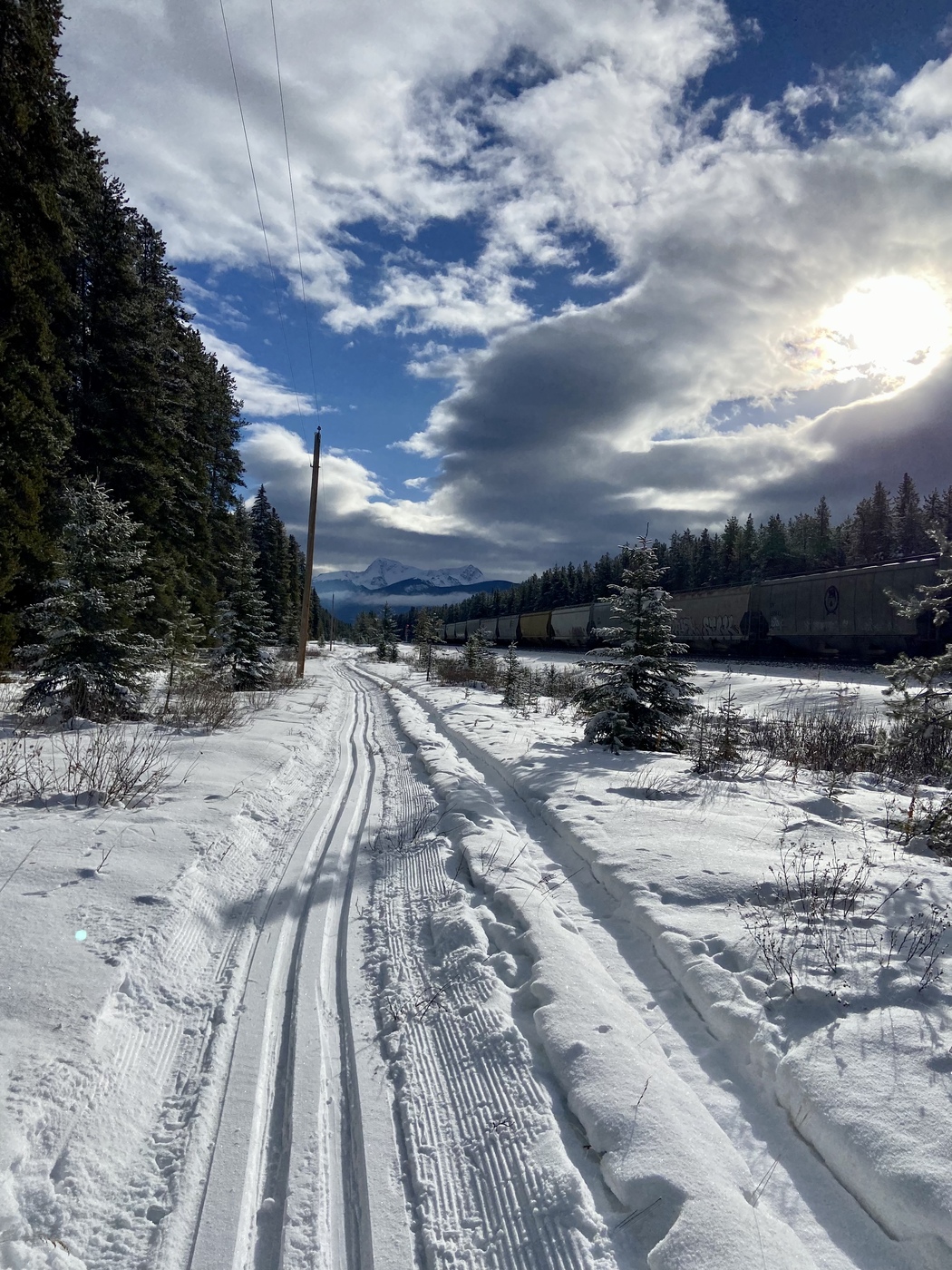 Pretty but not super representative of the twigs